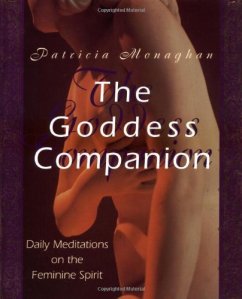 This is one of the first pagan books I bought myself, and I absolutely love it. It has an entry for every day of the year, so you can read it daily as a meditation, or open it when you feel you need guidance.

An example of a day:

The flood receded, leaving swamps
where life emerged anew like seeds
sprouting in a mother’s womb.
It was just like spring, when peasants
overturn the soil to find a world
of creatures there, as though the earth
itself crept and wriggled and was alive.
Life begins in heat and water,
those apparent opposites that stir
creation. Thus the sun, rising on
the flooded earth, brought forth new life.
– Ovid, Metamorphoses
In the myths of many cultures, the earth is destroyed – often by a flood – and then reborn, re-made. So it was in Greek and Roman mythology, which told of a great flood that only the woman Pyrrha and her mate Deucalion survived. Told by an oracle that she would bear children from “the bones of her mother,” Pyrrha figured out that her mother being the earth, the bones would mean the rock skeleton of the planet. Throwing stones behind herself, Pyrrha produced an entire new race of humans to repopulate the earth.

After the destructive flood, the earth replenished itself anew. Such myths capture the special freshness of spring, when all seems reborn. In our own lives, too, we will find times when an order is overturned – a job or love lost, a home transformed – but new order emerges from the ruin. Trusting in such rebirth is difficult, but every spring reminds us that renewal is an inevitable part of life.

Each day in the book brings a quote from ancient poetry or song or religious text about some aspect of the goddess. Some days it’s Horace or Homer, some days it’s a Lithuanian Folk song, or an Indian prayer to Kali. I love how it draws from such widely different traditions to show different faces of the goddess.

It’s quite seasonal; it doesn’t have days of the week, but it does go by dates, so you’ll find things about spring in February, March, and April; entries about depression and the dark of winter in December and January; entries about death and ancestors in October.

I highly recommend this book; it is well-written, insightful, and well-researched. This is a book I crack open not-quite-daily, but at least once a week, and whenever I need a goddess fix. I used to have quotes from this book written out on paper and posted all over my house. I did not realize the author had written so many other books – she has about 20 listed on her Wikipedia page! I only own The Goddess Companion and The Goddess Path, but I think I’ll be looking up more of her work. Sadly, she died about a year ago, but she left behind a wonderful body of work. If you’re interested in reading about the divine feminine, this book is a great place to start.