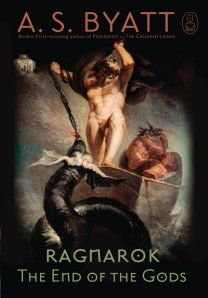 This was an interesting little read. It’s short – I finished it in a little over an hour – but unique. It details the birth, life, and death of Scandinavian mythology, as seen through the eyes of a young girl reading the book “Asgard and the Gods” during World War 2. With her father away fighting the war, and her life turned upside down by a move to the country to avoid The Blitz, she finds comfort in the myths and stories she reads. It’s a very good summary and retelling of the myths, fueled by gorgeous descriptions and deeply personal connections to them. The “thin child” reading the myths is the author herself, so in a way it’s autobiographical. (Other reviewers have called it “a love letter to Asgard and the Gods.”)

If you know the Scandinavian myths very well, the book might not hold much interest for you, but if you have only a basic understanding of them, as I did, this book is absolutely spellbinding. There are parts that felt like they were talking about my childhood, too:

“She was a logical child, as children go. She did not understand how such a nice, kind, good God as the one they prayed to, could condemn the whole earth for sinfulness and flood it, or condemn his only Son to a disgusting death on behalf of everyone. This death did not seem to have done much good. There was a war on. Possibly there would always be war on. The fighters on the other side were bad and not saved, or possibly were human and hurt. The thin child thought that these stories – the sweet, cotton-wool meek and mild one, the barbaric sacrificial gloating one, were both human make-ups, like the life of the giants in the Riesengebirge. Neither aspect made her want to write, or fed her imagination. They numbed it. She tried to think she might be wicked for thinking these things. She might be like Ignorance, in Pilgrim’s Progress, who fell into the pit at the gate of heaven. She tried to feel wicked. But her mind veered away, to where it was alive.”

Ragnarok is part of a series retelling old fairytales and legends called The Canongate Myths. Each one is by a different author – The Penelopiad by Margaret Atwood, Dream Angus by Alexander McCall Smith, Weight by Jeanette Winterson. Ragnarok is listed as #17 in the series on Goodreads! I’m not going to list them all here, but you can find the full list on Goodreads. I may have to pick up a few more of them, if they’re all of the same quality as Ragnarok.

From the back of Ragnarok: The End of the Gods:

As the bombs of the Blitz rain down on Britain, one young girl is evacuated to the countryside. She is struggling to make sense of her new life, whose dark, war-ravaged days feel very removed from the peace and love being preached in church and at school. Then she is given a copy of Asgard and the Gods – a book of ancient Norse myths – and her inner and outer worlds are transformed. She feels an instant kinship with these vivid, beautiful, terrifying tales of the end of the gods – they seem far more real, far more familiar during these precarious days.