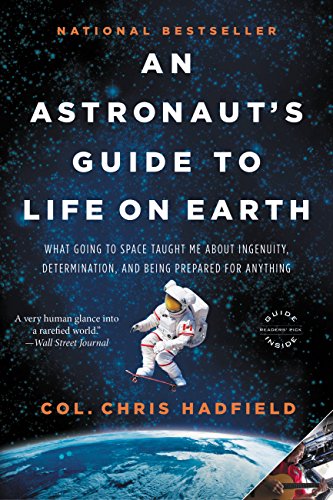 Wow. Just wow. I woke up far earlier than I wanted to this morning, so I picked up one of the nonfiction books I had from the library, expecting it to put me back to sleep. Three hours later I was still awake, nearly done with the book, and absolutely enthralled. I’m not sure why I thought it would be otherwise – I’d been one of the millions fascinated with Hadfield’s videos and tweets when he was Commander of the ISS. His particular voice is very clear throughout this book. In 284 pages he takes us from his childhood, through his career path to becoming an astronaut, to his 5 months in the International Space Station, and back home. Nothing felt rushed, nothing felt like it didn’t get the attention it deserved. I’m pretty sure this is going to be one of my favorite books of 2017 – I have several months to read more things, but this book just absolutely blew me away.

It does appeal to how I like to read about science, though. I love reading about scientists. How they worked, how they made their discoveries, the paths they took. Who they were. I’m less interested in the actual science. (As opposed to my husband, who cares only about the science, and isn’t interested in hearing much about the scientists.) This is part of why I loved A Short History of Nearly Everything, by Bill Bryson, so much. I borrowed that book from the library and read it cover to cover, fascinated. Finally had to buy my own copy.

Hadfield took space exploration and made it accessible to everyone. According to the book, he didn’t even quite realize how big of an impact he was making at first. But between tweeting pictures from the ISS, making videos of how different life was in space, and making music videos, he really did become the most well-known astronaut of our generation. I remember putting his video of I.S.S. (Is Somebody Singing) on repeat when it came out – and it STILL gives me chills today.

He only briefly talked about this video in the book, which I found surprising, given it was the one that hit me the hardest. He spent more time talking about filming and recording Space Oddity – which does have 36 million views, to I.S.S.’s 2 million. So I suppose that makes sense!

One thing he keeps coming back to in his book is his philosophy of trying to be a zero. That doesn’t sound very ambitious on the surface – but what he means is you can be one of three things in a group. You can be a negative impact (a -1) a neutral impact (a zero) or a positive impact (a +1). If you try to be a +1, it’s far likelier that you’ll try too hard, fuck up, and instead become a negative impact. So aim to be a zero. And most of the time you’ll wind up as a positive impact. I thought that was a very unique philosophy.

He’s also written a children’s book, The Darkest Dark, about a kid who wants to be an astronaut but is afraid of the dark.

This is the second book I’ve read for the Canadian Book Challenge, and I’m so glad I finally got around to it. (It’s the first one I’m reviewing, though, the first book I read I’ll be reviewing in August.)

My other Canadian reviews:
1. this book!
2. The Red Winter Trilogy
3. Station Eleven
4. The Courier
5. The Last Neanderthal
6. American War
7. Next Year, For Sure
8. That Inevitable Victorian Thing
9. All The Rage
10. The Clothesline Swing
11. Saints and Misfits
12. Tomboy Survival Guide
13. The Wolves of Winter

From the cover of An Astronaut’s Guide to Life on Earth:

Col. Chris Hadfield has spend decades training as an astronaut and has logged nearly four thousand hours in space. During this time he has broken into a space station with a Swiss Army knife, disposed of a live snake while piloting a plane, and been temporarily blinded while clinging to the exterior of an orbiting spacecraft. The secret to Col. Hadfield’s success – and survival – is an unconventional philosophy he learned at NASA: Prepare for the worst – and enjoy every moment of it.

In An Astronaut’s Guide to Life on Earth, Col. Hadfield takes readers deep into his years of training and space exploration to show how to make the impossible possible. Through eye-opening, entertaining stories that convey the adrenaline of launch, the mesmerizing wonder of space walks, and the measured, calm responses mandated by crises, he explains how conventional wisdom can get in the way of achievement – and happiness. His own extraordinary education in space has taught him some counterintuitive lessons: Don’t visualize success, do care what others think, and always sweat the small stuff.

You may never be able to build a robot, pilot a spacecraft, make a music video, or perform basic surgery in zero gravity like Col. Hadfield. But his vivid and refreshing insights will teach you how to think like an astronaut and will change, completely, the way you view life on earth – especially your own.