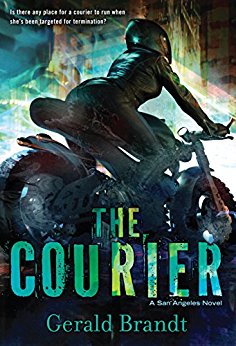 Oh this was good. This was rocketing sci-fi action reminiscient of Shadowrun – the corporations control everything, and everything is taped, tracked, and monitored. Cities have merged into giant, sprawling, multi-level megaliths, where only the top level is open to the sky, and the lower you get, the more squalor people live in. (And the lower the ceiling gets, too. Level one is a somewhat claustrophobic 5 stories high, and then a ceiling.)

Trigger warning for the book:

The main character has flashbacks of being sexually abused as a young teen, and they are fairly detailed. Perhaps too detailed – but they do give good motivation for why she fights so hard to avoid becoming a victim again. (There’s also a constant threat of injury, death, and torture, if she gets caught.) The sexual abuse wasn’t even hinted at by anything else I’ve read, so I wanted to make sure I pointed it out.

That aside, and even that is handled fairly well, it just took me by surprise – The Courier is pretty great writing. It’s the first of three books, currently – I don’t know if it’s a trilogy, or if there are more planned. The author is also Canadian and lives in Winnipeg, making this the fourth book for my Read Canadian Challenge! The Courier was actually on the Canadian Broadcasting Corporation’s list of the 10 Canadian Science Fiction Books You Should Read.

I like that the main character evolved through the book – from a gruff courier who thought she was doing pretty well, but not really thinking beyond the end of the day and a shower, back slightly to running and licking her wounds while wondering why the world hates her, to “No, fuck this, and fuck these people, I WILL FIGHT YOU.” It was all a very believable reaction to some extraordinary events. There’s an excerpt in the back of the book for the second book, and the third book comes out in November. I will definitely be trying to get my hands on those. Unfortunately, my library only has the second book as an audio book. I’ll have to check the Enoch Pratt catalog.

From the cover of The Courier:

Kris Ballard is a motorcycle courier. A nobody. Level 2 trash in a multileve city that stretches from San Francisco to the Mexican border – a land where corporations make all the rules. A runaway since the age of fourteen, Kris struggles to make a life for herself, barely scraping by, working hard to survive without anyone’s help.

But a late day delivery changes everything when she walks in on the murder of one of her clients. Now she’s stuck with a mysterious package that everyone wants. It looks like the corporations want Kris gone, and are willing to go to almost any length to make it happen.

Hunted, scared, and alone, she retreats to the only place she knows she can hide: the Level 1 streets. Fleeing from people who seem to know her every move, Kris is almost out of options when she’s rescued by Miller – a member of an underground resistance group – only to be pulled deeper into a world she doesn’t understand.

Together Kris and Miller barely manage to stay one step ahead of the corporate killers, but it’s only a matter of time until Miller’s resources and their luck run out…

This is #4 for my Read Canadian Challenge!