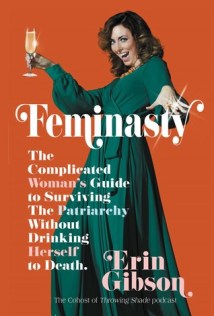 Feminasty: The Complicated Woman’s Guide to Surviving the Patriarchy Without Drinking Herself to Death
by Erin Gibson
Comedic Memoir/Feminism
280 pages
Published September 2018

Comedic collection of essays about feminism? Yeah, I’m in. I was actually unaware of Erin Gibson prior to this book; she’s apparently pretty popular as one of the personalities on a podcast named Throwing Shade. But she’s got a way with words, and a sharp undercurrent of anger under the jokes, which happens to be just the way I like my political comedy.

That said, there wasn’t really anything new in this book. It’s the same ranting I’ve seen millions of times on Facebook and Twitter and online editorials. I really enjoyed her summary of the annual ob/gyn visit. I just didn’t find it all that original.

She’s got some amazing chapter titles – “THE TERRIFYING PROSPECT OF MIKE ‘VAGINAS ARE THE DEVIL’S MOUTH FLAPS’ PENCE” for example, or “EVERYONE HAS A CHOICE . . . UNLESS YOU’RE A WOMAN AND IT’S BEEN TAKEN AWAY FROM YOU.” She sums up a lot of topics that fledgling feminists might not know many details about, from abortion rights to sexist dress codes to teen abstinence pledges. But for the well-read, politically informed feminist that I try to be, I didn’t get much out of this book.

So – funny, yes. Sharp, angry wit, yes. Worth taking up space on my list when I have SO MANY other things to read? Not really.

From the cover of Feminasty:

Too bad I don’t give a f*ck about what the patriarchy wants.

Erin Gibson has a singular goal: to create a utopian future where women are recognized as humans. In Feminasty – titled after her nickname on the hit podcast Throwing Shade – she has written a collection of make-you-laugh-until-you-cry essays that expose the hidden rules that make life as a woman unnecessarily hard and deconstructs them in a way that’s bold, provocative, and hilarious.

Whether it’s about shaming women for having their periods, allowing them into STEM fields but never treating them like they truly belong, or dictating strict rules for how they should dress in every situation, Erin breaks down the organized chaos of old-fashioned sexism, intentional and otherwise, that systemically keeps women down.

Feminasty is Erin Gibson’s revolutionary handbook for dismantling the patriarchy, one pay gap joke at a time.