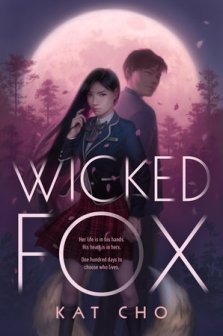 I loved everything about this book except the epilogue. But we’ll get to that. Wicked Fox is the story of Miyoung, a gumiho. Better known to most Westerners as a Kitsune, but this is Korea, not Japan. The difference is important, and evident. I really enjoyed all of the Korean culture included in this book; it’s not as common a setting as Japan or China. Americans often make the mistake of lumping all of eastern Asia together as far as culture, but they are very different. South Korea isn’t as unfamiliar to us as some East Asian cultures – like Mongolia, Taiwan, or North Korea – but China and Japan tend to overshadow the rest.

So in Seoul, we have Miyoung, whose nature drives her to absorb the life essence of humans to sustain her own. She tries to do this in the best way she can, by hunting evil men, but something goes wrong on one of her hunts, she saves a human boy’s life, and things unravel from there.

I loved Jihoon. The poor boy is thrust into the middle of an impossible situation, and tries to do his best by everyone involved. It’s easy to see why Miyoung is drawn to him, and I love the easy comradery between Jihoon and his friends, as well.

The book would easily be a perfect standalone were it not for the epilogue. I will probably just pretend to myself that the epilogue doesn’t exist, and be happy with the book as-is. I don’t think it needs a sequel, and it feels a little forced. Almost like the book was done and turned in and the publisher offered the author a sequel, and she decided she could make that happen and tacked on a few pages to lead us to the next book. It’s just – unneeded.

The epilogue aside, I adored this book.

From the cover of Wicked Fox:

Eighteen-year-old Gu Miyoung has a secret. She’s a gumiho – a nine-tailed fox who survives by consuming the energy of men. But she’s also half-human and has a soft spot for people. So she won’t kill indiscriminately. With the help of a shaman, Miyoung only takes the lives of men who have committed terrible crimes. Devouring their life force is a morbid kind of justice . . . or so she tells herself.

But killing men no one would ever miss in bustling modern-day Seoul also helps Miyoung keep a low profile. She and her mother protect themselves by hiding in plain sight. That is until Miyoung crosses paths with a handsome boy her age as he’s being attacked by a goblin in the woods. She breaks her mother’s cardinal rule – revealing herself and her nine tails – to save Jihoon from certain death. In the process, she loses her fox bead – her gumiho soul. Without it, she will die.

When Miyoung and Jihoon next meet, there’s no doubt they are drawn to each other. But their tenuous romance could be over before it even begins, as Miyoung’s efforts to restore her fox bead by the next full moon ensnares them in a generations-old feud, forcing Miyoung to choose between her immortal life and Jihoon’s.