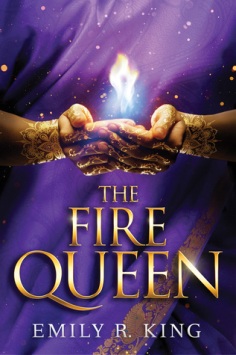 I reviewed The Hundredth Queen a short time ago, and mentioned it was possibly a little culturally appropriative for a book written by a white woman, but I was invested enough in the characters to finish the series. While the culture resembles some time periods in India, the religion is inspired by ancient Sumeria, and much of the fourth book is reminiscent of the Inanna myth. I’ve only included the description of the second book, below, because the descriptions are full of spoilers for the series, as is often the problem for series reviews!

So I can’t really say how much the series is or is not appropriative; I’m not Indian. I don’t get to make that call. Regardless, it is something to be aware of before you read. 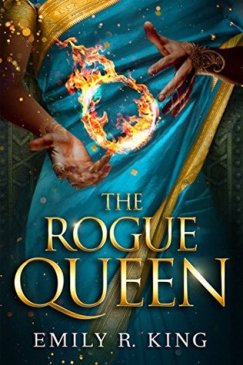 That said, I enjoyed this series more than I expected to! Kalinda and Natesa are both awesome female fighters, and both of their love interests, while capable, are definitely cast in the “supporting character” role, to help show how badass the girls are.

One thing I did not like is how much they emphasize “sisterhood” and “sister warriors” yet turn around and fight each other – to the death! – to win a man or a position. Somehow Kalinda is the only woman to see how contradictory this is?

Kalinda’s nickname is also Kali, and, for a series with a disclaimer right up front basically saying “THIS IS NOT INDIA” maybe she should have picked a different name for the main character?

So I have a lot of questions about this series. There are contradictions, and plot holes, and improbable coincidences. I enjoyed the magic system. At its heart, it’s your basic elemental magic – earth, air, water, fire – but what the bhutas (magic wielders) can actually do with their elements is intriguing. In particular, the four directly-damaging uses – winnowing, leeching, grinding, and parching – are unique. Burners – fire-wielders – can parch people – literally burning their soul, basically. Tremblers – earth – can grind peoples’ bones together. Galers – air – can winnow, pulling oxygen out of the blood, tissues, and lungs of an enemy, and Aquifiers – water – can leech, pulling the liquid out of a person. All four magic wielders can control their element to do various tasks, but it’s the directly offensive uses that seem original. 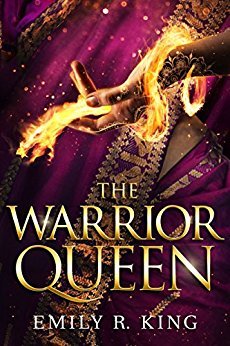 Overall the plot is – fine – but it actually goes to the other end of the extreme that I complained about in Queen of Ruin. Obstacle after obstacle after obstacle. Ridiculous speedbumps, stupid mistakes, people acting out of character in order to throw another wrench in the works. I think the story could have been condensed down to three books and been far better for it.

A Spark of White Fire is a far better book with a similar feel to it, written by an Asian author. Read that instead.

From the cover of The Fire Queen:

WITH THE POWER OF FIRE, SHE WILL SPARK A REVOLUTION.

In the second book of the Hundredth Queen series, Emily R. King once again follows a young warrior queen’s rise to meet her destiny in a richly imagined world of sorcery and forbidden powers.

Though the tyrant rajah she was forced to marry is dead, Kalinda’s troubles are far from over. A warlord has invaded the imperial city, and now she’s in exile. But she isn’t alone. Kalinda has the allegiance of Captain Deven Naik, her guard and beloved, imprisoned for treason and stripped of command. With the empire at war, their best hope is to find Prince Ashwin, the rajah’s son, who has promised Deven’s freedom on one condition: that Kalinda will fight and defeat three formidable opponents.

But as Kalinda’s tournament strengths are once again challenged, so too is her relationship with Deven. While Deven fears her powers, Ashwin reveres them – as well as the courageous woman who wields them. Kalinda comes to regard Ashwin as the only man who can repair a warring world and finds herself torn between her allegiance to Deven and a newly found respect for the young prince.

With both the responsibility to protect her people and the fate of those she loves weighing heavily upon her, Kalinda is forced again to compete. She must test the limits of her fire powers and her hard-won wisdom. But will that be enough to unite the empire without sacrificing all she holds dear?

Afire Pages
INKISH KINGDOMS
A Cat, A Book, and A Cup of Tea
Forever and Everly
My World of Books