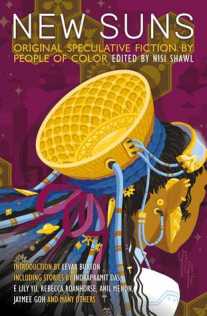 This was quite the collection! I disagree with the cover description’s use of “unexpected brilliance” – I think that’s actually slightly insulting, and possibly racist. (Who wrote that line?!) I fully expected the brilliance I got, and was very pleased with it!

From the forward by Levar Burton, through stories by Hispanic, Black, Asian, and Indigenous authors, all the way to the Afterword from Nisi Shawl, this was an amazing, fascinating, mind-blowing book. Rebecca Roanhorse is probably the most well-known of the authors, thanks to Trail of Lightning, but Indrapramit Das wrote The Devourers, which I’ve heard about and have on my Kindle but have not yet read, and Steven Barnes is married to another author I’ve read, Tananarive Due. Silvia Moreno-Garcia wrote the recently released Gods of Jade and Shadow, which I picked up through Book of the Month in July but have again, not yet read. Library books keep taking priority over things I own!

Going through the biographies in the back of the book makes me want to add EVERYTHING to my TBR – with titles like The Sea is Ours: Tales of Steampunk Southeast Asia, Will Do Magic For Small Change, and The Beast With Nine Billion Feet, how could I not?!

Back to the book itself, though! There are 17 stories in this book, ranging from 5 pages to 20-30 pages. I think my favorite was “The Freedom of the Shifting Sea” by Jaymee Goh, about an Asian mermaid, but the one just before it, “Burn the Ships,” about indigenous South Americans fighting back with blood magic against Spaniards, was also amazing. (Written by Alberto Yáñez.) Really all of the stories are spell-binding, though. And the variety is VAST. From a story retelling The Emperor’s New Clothes, in three variations, to Earth becoming a tourist destination for galactics (aliens), to a story imagining what we would be like with computers in our heads to keep us from having destructive emotions, these are wildly imaginative and thought-provoking.

I love reading short story anthologies because they always introduce me to new authors I want to read more of, which this book unequivocally did. I also have more reason to read Gods of Jade and Shadow now!

This should be on the reading list of every spec fic fan. I’m going to leave you with the quote that begins the book and inspired the title, from one of the mothers of modern science fiction, Octavia Butler:

“There’s nothing new under the sun, but there are new suns.”

From the cover of New Suns:

New Suns: Original Speculative Fiction by People of Color showcases emerging and seasoned writers of many races telling stories filled with shocking delights, powerful visions of the familiar made strange. Between this book’s covers burn tales of science fiction, fantasy, horror, and their indefinable overlappings. These are authors aware of our many possible pasts and futures, authors freed of stereotypes and cliches, ready to dazzle you with their daring genius.

Unexpected brilliance shines forth from every page.