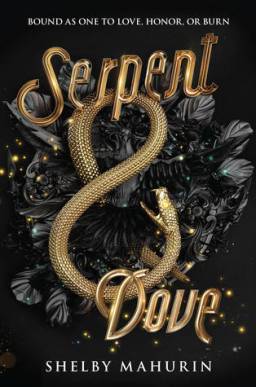 This was Barnes & Noble’s Young Adult book club book for October, so I read it because I was planning to go. I ended up feeling particularly introverted that entire week, so I stayed home, but I’d read the book anyway, so here we are!

So first off, there’s some debate over whether the book is young adult or new adult. Lou, the heroine, is 18, and Reid is a little older, but it still feels very young adult-ish. There is one sex scene which, while explicit, is still fairly tame as sex scenes go. So I’m calling it young adult, but it’s definitely right on the line where it could go either way.

The book begins with an example of why witches are so reviled in this land, but quickly segues into an entirely unlikely sequence of events that ends with Lou, our witch, married to Reid, our witch hunter, to save face for the witch hunting society known as the Chasseurs. Reid doesn’t know she’s a witch, and she has to keep that hidden while living with her mortal enemies. We soon learn that Lou has enemies of her own, and living with witch hunters might actually be the safest place for her, if she can keep her own secrets.

Lou is not the only one that knows her secrets, however, and the war between witches and the Church soon heats up with Lou and Reid caught in the crossfire.

There are twists and turns aplenty in this plot, and reveals that I did not see coming. It definitely keeps you on your toes. I’m not completely sold on the romance between Lou and Reid. It seemed a little contrived, to me, but the rest of the plot was interesting.

Magic in this world has a very literal cost that the witch must pay if she wants the spell to work. Sometimes it’s fairly small – a broken finger for a broken lock – sometimes it’s bigger – all your fond memories of a person, for example. Someone’s life. If you’re willing to pay the price, the magic lets you do extraordinary things. At least it shows you the cost first, instead of simply taking it after the fact. You’re given the choice.

Blood & Honey is the sequel, due out this summer, and I think I’ll probably pick it up and give Reid and Lou another shot at convincing me their love is real. I do want to know how the rest of the story plays out, their relationship aside!

From the cover of Serpent & Dove:

BOUND AS ONE TO LOVE, HONOR, OR BURN

Two years ago, LOUISE LE BLANC fled her coven and took shelter in the city of Cesarine, forsaking all magic and living off whatever she could steal. There, witches like Lou are hunted. They are feared. And they are burned.

Sworn to the church as a Chasseur, REID DIGGORY has lived his life by one principle: Thou shalt not suffer a witch to live. His path was never meant to cross with Lou’s, but a wicked stunt forces them into an impossible union – holy matrimony.

The war between witches and Church is an ancient one, and Lou’s most dangerous enemies bring a fate worse than fire. Unable to ignore her growing feelings, yet powerless to change what she is, a choice must be made.

AND LOVE MAKES FOOLS OF US ALL.

A witch and a witch hunter bound in holy matrimony.

There was only one way such a story could end –