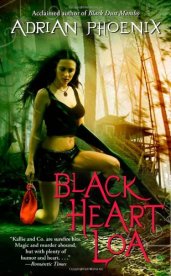 This was on my library’s “used books for sale” shelf, on the Christmas sale of 2 books for $1. The premise looked interesting – haven’t seen hoodoo-centered urban fantasy before! So I searched around to find a second book (The Elfish Gene) and bought them both. And I’m glad I did, even if I haven’t read The Elfish Gene yet! Black Heart Loa is actually the second in Phoenix’s Hoodoo series, the first being Black Dust Mambo. Even without reading the first one, Black Heart Loa is easy to follow, and the events of Black Dust Mambo are easily understood, without really having them rehashed to the reader. Part of that, I expect, is because Black Heart Loa is dealing with the fallout of the events of Black Dust Mambo, so things get explained in a natural progression in the book.

BHL was a rolicking fun ride through the swamps of Louisiana. I can’t speak for the accuracy of how the hoodoo belief system is represented, but most religious beliefs in urban fantasy get a vigorous twisting from the author, as miracles and magic become real in the fictional world. So I’m not terribly worried about the accuracy, as long as they’re not portrayed solely in a good or bad light. And in BHL there are both good and bad practitioners of hoodoo, illustrating the point that it’s not the religion that is inherently good or bad, but the person practicing it. So that moral quandary aside, I really, REALLY enjoyed this book. Kallie is a fun, ass-kicking, smart-talking protagonist, though I found myself wanting to know more about her best friend, a mambo-in-training.

I especially want to know more about a character who was introduced late in the book, but the ending of the book implies more books to come, and more focus on the character I’m intrigued by, so I’ll have to see if I can dig up more of this series. Amazon says this book is 2 of 2 in the series, so hopefully the author is still going to write more!

From the back of Black Heart Loa:

“An eye for an eye is never enough.”

Kallie Riviere, a Cajun hoodoo apprentice with a bent for trouble, learned the meaning of those ominous words when hoodoo bogeyman Doctor Heron targeted her family for revenge. Now, while searching for her still-missing bayou pirate cousin, Kallie finds out the hard way that someone is undoing powerful gris gris, which means that working magic has become as unpredictable as rolling a handful of dice. The wards woven to protect the Gulf coast are unraveling, leaving New Orleans and the surrounding bayous vulnerable just as an unnatural storm – the deadliest in a century – is born. As the hurricane powers toward the heart of all she loves, Kallie desperately searches for the cause of the disturbing randomness, only to learn a deeply unsettling truth: the culprit may be herself. To protect her family and friends, including the sexy nomad Layne Vallin, Kallie steps into the jaws of danger . . . and finds a loup garou designed to steal her heart – literally.

Another of the books my mother sent me for Christmas, this is actually a book I’d had from my local library and put on my wish list because it’s amazing. Stats! 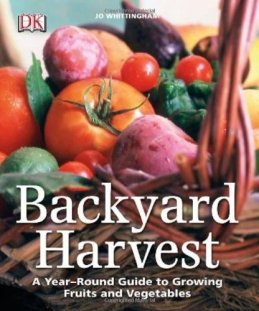 Backyard Harvest is set up by months, which makes for a unique and absolutely essential (to me, a beginner) book. In every month, it tells you what you should be eating (provided you had planted it previously!), what you should be planting, what you should be pruning or transplanting or otherwise working on, and usually a few pages on a seasonal-appropriate subject. (A section on apples and apple trees in November, for example.) The layout is gorgeous, the instructions are easy to understand, and I feel like after a few years of following this book I’ll be eating from my garden every month of the year with ease.

For January, for example, if I had these things planted, harvested, or stored from last year, I should be eating pickles, stored root veggies, newly lifted Salsify, forced Belgian Endive, and winter radishes, among other tasty-looking things. I should be sowing (indoors, to transplant after the last frost) early-season leeks, summer onions, lettuce, broad beans, cut-and-come-again greens, and early peas and radishes. For tending, I should be amending my soil, keeping an eye on my stored fruits and veggies for signs of rot, pruning some of my fruit trees, and picking up fallen leaves from hardy winter brassicas so they don’t cause rot at the base of the plants. The feature for the month is building a seedbed, both raised and non. In January I should be harvesting celeriac, early broccoli, the aforementioned Belgian Endive, and spring greens. Another feature for the month is sprouting seeds for use in salads. Each of these categories gets its own two-page spread, the monthly features occasionally getting four or more.

It’s a lovely, really useful book, and one I HAD to own after getting it from the library. It will be getting heavy use in the coming months, I’m sure!

Whittingham has written or co-written three other books – Vegetable Gardening and Grow Vegetables before this book, and Simple Steps to Success: Fruit and Vegetables in Pots after. The latter appears to be a combination of the first two in a new format, but I could be wrong. So I’m not sure I’d recommend any of those three – I haven’t read them – but Backyard Harvest is awesome! 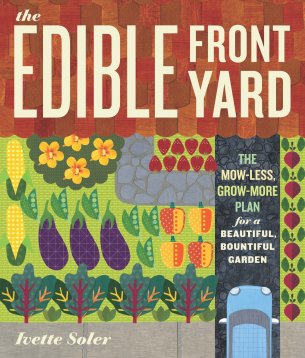 I would definitely give this book the full five stars. It’s filled with gorgeous, full-color, glossy photographs that really show off the concepts illustrated in the book. Soler describes both some common vegetables (corn and beans, for example) as well as some things I didn’t even know were edible, like daylilies and nasturtiums! She includes a lot of unusual edibles, like artichokes and bananas, the latter of which I can’t grow outside here in Maryland. She lives in LA, though, and I completely understand how it must be complicated to write a book applicable to the entire United States!

Her chapters range from “Curb Appeal” – WHY should we care what our yard looks like, and what actually looks good? – to “The New Front Yard Plant Palette” which is all about classic edibles that also look great. Another chapter is about helper plants – plants that aren’t necessarily edible (though some of them are), but that serve other purposes in the garden, such as pest repellant or predatory bug attractants. Both of these chapters list a TON of plants, with short descriptions about why they’re on the list, how to take care of them, and what to use them for. EXTREMELY useful.

Soler has her own blog – The Germinatrix – but unfortunately it doesn’t look like it’s been updated since 2012. Her Twitter seems to have died about the same time, and her Facebook hasn’t seen a post since early 2013. I’m still hoping to find her presence online, as I love her writing style and would love to find more of her work.

I have been surprised and flattered by the occasional like or follow this blog still receives – I haven’t updated it in two years! Life has been very hectic, and stressed. But the blogging bug has bit again, and I actually started a new blog to chronicle the progress of turning our new home’s yard into a vegetable garden. But then I remembered my little book blog over here, still getting the occasional like….it’s not like I quit reading! I just haven’t reviewed and posted! I’m not sure how well I’ll be able to keep up with two blogs, but I AM reviewing gardening/homesteading books over on my new blog, Badger Sett Farm, so I thought – I can cross post those reviews here. And maybe – maybe I can fit in some reviews for everything else I’m reading too.

Right now I’m in the process of going back through my old posts and updating links where they need to be updated. I’ll be cross-posting the two reviews I’ve done over on Badger Sett, and then I might just get some new content up!