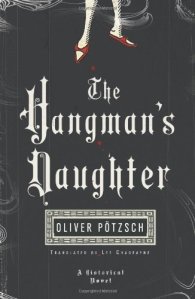 I spent my entire day at the Maryland Renaissance Festival yesterday. (And man, do my feet hurt!) But it was an absolute blast; we watched the three sirens of “Sirena” sing some haunting melodies (and “steal” my husband’s soul and eat it as part of their act!), watched a couple of hilarious comedy shows (Fight School slayed me) and watched the final round of jousting. Did you know jousting is Maryland’s official sport? How cool is that?

On the way to the fair I finished The Hangman’s Daughter. The Hangman’s Daughter was originally written in German by Oliver Pötzsch, but my version was translated to English by Lee Chadeayne. I didn’t realize until I read the “About the Author” followed by “About the Translator” that it wasn’t written originally in English! It flowed exceptionally well. The story revolves around the mysterious deaths of three children, the midwife the town wants to pin it on, and a mystery surrounding the sabotage of the leper house being built just outside the walls of the town. The Hangman is actually one of the most sympathetic characters in the story, which I found unique. Usually the executioner/torturer is painted as evil. Along with his daughter and the town doctor’s son, an accomplished doctor himself, they attempt to solve the mystery of who’s killing children before the town can convict and sentence the midwife.

There are three more books in this series, The Dark Monk, The Beggar King, and The Poisoned Pilgrim. Definitely going to look for those!

(Edit: I have since read the aforementioned sequels, and reviewed them here. They were excellent!)

I REALLY enjoyed this book, and I will probably try to track down other English translations of this author’s work. I don’t read too many mysteries (though I do have a few more in the queue at the moment) but this book really swept me up and carried me along for the ride. It’s set in 17th century Bavaria, 70 years after the last witch craze. Jakob Kuisl is the town’s Hangman, and, as it turns out, one of the author’s ancestors! The author apparently wrote the novel as a way of connecting with his roots; he is descended from the Kuisls, who were Hangmen for generations.

I don’t want to say too much for fear of spoiling the mystery, so I’ll go straight to the back of the book.

From the back of The Hangman’s Daughter:

Simon turned the boy on his belly. With a vigorous tug he ripped open the shirt on the back as well. A groan went through the crowd.

Beneath one shoulder blade there was a palm-size sign of a kind that Simon had never seen before – a washed-out purple circle with a cross protruding from the bottom.

For a moment, there was total silence on the pier. Then the first screams rose. “Witchcraft! There’s witchcraft involved!” Somebody bawled: “The witches have come back to Schongau! They’re getting our kids!”

One thought on “The Hangman’s Daughter by Oliver Pötzsch”