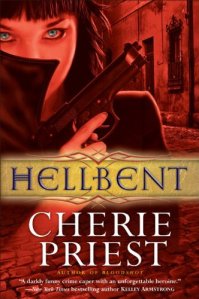 I picked up Hellbent for one sentence on the back cover. “Her Seattle home is already overrun by a band of misfits, including Ian Stott, a blind vampire, and Adrian deJesus, an ex-Navy SEAL/drag queen.” I mean, doesn’t that sound like fun to you? Hellbent is actually the second book in a series about Raylene Pendle, a vampire thief; Bloodshot being the first. I’ve not read Bloodshot, but I didn’t need to to follow the action in Hellbent.

Raylene is contracted to recover a box of bacula – penis bones. (Snicker.) Not just any penis bones, but penis bones of various supernatural species. Lycanthropes, Basilisk, Sasquatch, to name a few. Supernatural bacula have a lot of magical punch, and will sell for a few million dollars apiece in Raylene’s world. Along the way to recovering the bacula, Raylene also has to keep her blind vampire friend from getting dusted by his old House, and solve the mystery of his sire’s murder.

It’s a fun read, and Raylene is a sarcastic, intelligent protagonist. There’s an undercurrent of romance between Raylene and Ian, AND Raylene and Adrian, but it’s never overt or a main part of the plot. From a drag show to penis jokes to outrunning a tornado, Raylene the vampire thief sails through her problems, collecting stray people to her as she does so. I admit I would have liked to see more ass-kicking; there was only one real action scene in the book, and it was very short. I was also a little surprised at how quickly an enemy turned into a friend, that seemed a little sudden. Overall, a fun, light-hearted vampire romp that doesn’t get bogged down by too much romance or politicking.

From the back of Hellbent:

Vampire thief Raylene Pendle doesn’t need more complications in her life. Her Seattle home is already overrun by a band of misfits, including Ian Stott, a blind vampire, and Adrian deJesus, an ex-Navy SEAL/drag queen. But Raylene still can’t resist an old pal’s request: seek out and steal a bizarre set of artifacts. Also on the hunt is a brilliant but certifiably crazy sorceress determined to stomp anyone who gets in her way. But Raylene’s biggest problem is that the death of Ian’s vaunted patriarch appears to have made him the next target of some blood-sucking sociopaths.  Now Raylene must snatch up the potent relics, solve a murder, and keep Ian safe—all while fending off a psychotic sorceress. But at least she won’t be alone. A girl could do a lot worse for a partner than an ass-kicking drag queen—right?