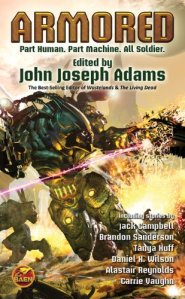 So I’m not real big on straight up Sci-fi usually – I like my Sci-fi with at least a touch of fantasy. I especially don’t usually read military sci-fi. Armored is all about mechs, mostly military-style mechs, so I wasn’t sure how I’d feel about the book, but there were a few authors I recognized, so I gave it a shot. (My husband read it first and really liked it, so that was another point in its favor.) I’m very glad I took a chance on it! There are a couple of stories that left me wanting more in the world – and a couple of them are side stories from larger novels or series, so I may need to look those up. There are 23 stories in the book, each one about 20-25 pages long.

Some stories have sentient mechs bonded with humans; some are mechs completely driven by humans. In a couple stories the mech featured is the first mech every built; in some the mech is the latest model, or something in between. The book is a wonderful collection of different authors’ takes on man (or woman)+armored suit. One story is just a blood-filled shoot ’em up almost from start to finish; one story spends the entire time philosophizing about the melding of man+machine and what that means to society and the individual psyche.

From the back of Armored:

Decades ago, Starship Troopers captivated readers with its vision of a future war in which power armored soldiers battled giant insects on hostile alien planets. Today, with the success of Iron Man, Halo, and Mechwarrior–and with real robotic exoskeletons just around the corner–the idea of super-powered combat armor and giant mecha has never been more exciting and relevant.

Now acclaimed editor John Joseph Adams brings you the first-ever original anthology of power armor fiction. Join leading SF authors Jack Campbell, Brandon Sanderson, Tanya Huff, Daniel H. Wilson, Alastair Reynolds, Carrie Vaughn, and others as they explore the limits of what a soldier of the future might become–with the aid of the right equipment.

Imagine power armored warriors battling at the bottom of the sea, or on nightmarish alien worlds, or in the darkest depths of space. Imagine armor that’s as smart as you are, armor that might keep on fighting even after you’re no longer willing … or able.