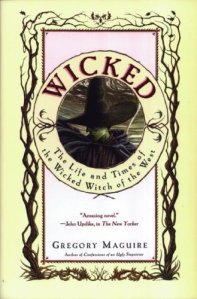 Wicked: The Life and Times of the Wicked Witch of the West by Gregory Maguire
416 pages
Published 1995
Fantasy

I saw the musical version of Wicked two or three years ago, and ADORED it. I’d been wanting to pick up this book for sometime, and finally found both it and the sequel at my local library. (I just learned there are two more books, A Lion Among Men and Out of Oz, so I’ll be requesting those from the library soon!) I started the book knowing, from other reviewers, that it was very different from the musical. Unlike most of the reviews I read, that didn’t make me not like it. Quite the contrary. I loved seeing the politics and social unrest hidden behind the scenes. The musical hints at the pogroms against Animals (the sentient ones) but doesn’t go into the Whys and Hows like the book does. Wicked and its sequel are much grittier, much darker. At times they feel like political commentary. I loved them.

Wicked is the story of Elphaba, Oz’s Wicked Witch of the West. Her story tells us about her birth, her childhood, her school years, and how she eventually came to be the Wicked Witch of the West. Throughout the course of the book we meet Glinda, the Good Witch (and Elphaba’s college roommate), the Wicked Witch’s flying monkeys, and the Wizard of Oz. The Wicked Witch, unsurprisingly, is not as evil as she’s painted to be. Her sister, though…I might not call her wicked, but dictatorial? Yes. Wicked also introduces Liir, Elphaba’s son. His story is the sequel, Son of a Witch. 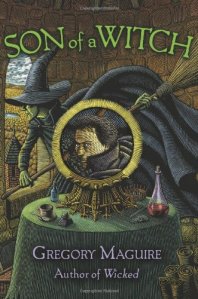 In Son of a Witch, we watch Liir try to decide who he is and what he wants to do with his life. Is he really Elphaba’s son? What does that mean for his future? Should he take up her mantle and her responsibilities? So many people seem to think it’s his duty to do so, but he’s not Elphaba. She never confided her dreams and goals to him, so he doesn’t even really know what those duties are, much less if he wants to take them up. Son of a Witch is really the story of an identity crisis, but it’s an identity crisis with the added pressure of entire tribes and races of peoples looking to Liir for help, or guidance, or simply answers that he does not have.

I very much enjoyed both books, and I’m excited to find out there are two more in the series. I definitely had some unanswered questions at the end of Son of a Witch, and was disappointed when I thought that was the end. I also plan to look up the author’s other, similar books – Confessions of an Ugly Stepsister (Cinderella), Mirror Mirror (Snow White), and many others not based on fairy tales. Or recognizable fairy tales, anyway.

Reading these two books has also made me want to re-read the Oz series – I read most of them years ago in middle school, but I think I may try to grab them from the library again. Oz is such an interesting world, and re-reading them after reading The Wicked Years might shine a whole new light on them.

From the back of Wicked:

When Dorothy triumphed over the Wicked Witch of the West in L. Frank Baum’s classic tale, we heard only her side of the story. But what about her arch-nemesis, the mysterious Witch? Where did she come from? How did she become so wicked? And what is the true nature of evil?

Gregory Maguire creates a fantasy world so rich and vivid that we will never look at Oz the same way again. Wicked is about a land where animals talk and strive to be treated like first-class citizens, Munchkinlanders seek the comfort of middle-class stability, and the Tin Man becomes a victim of domestic violence. And then there is the little green-skinned girl named Elphaba, who will grow up to become the infamous Wicked Witch of the West, a smart, prickly, and misunderstood creature who challenges all our preconceived notions about the nature of good and evil.

From the back of Son of a Witch:

Ten years after the publication of Wicked, beloved novelist Gregory Maguire returns at last to the land of Oz. There he introduces us to Liir, an adolescent boy last seen hiding in the shadows of the castle after Dorothy did in the Witch. Bruised, comatose, and left for dead in a gully, Liir is shattered in spirit as well as in form. But he is tended at the Cloister of Saint Glinda by the silent novice called Candle, who wills him back to life with her musical gifts.

What dark force left Liir in this condition? Is he really Elphaba’s son? He has her broom and her cape – but what of her powers? Can he find his supposed half-sister, Nor, last seen in the forbidding prison, Southstairs? Can he fulfill the last wishes of a dying princess? In an Oz that, since the Wizard’s departure, is under new and dangerous management, can Liir keep his head down long enough to grow up?

2 thoughts on “Book Review: Wicked and Son of a Witch”