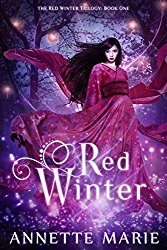 So I didn’t actually realize this series was written by a Canadian author until the end of the first book, when I skimmed the “about the author” section! I picked up the first book on a whim – the entire trilogy is free on Kindle Unlimited – and I am so, SO GLAD I DID. This trilogy is amazing. It’s a little anime-like – the illustrations are definitely drawn in anime style and there’s about ten per book – but it’s simply beautiful writing, blending elements of Japanese mythology with a beautifully sweet romance and an epic fantasy task. (Release trapped gods and goddesses and stop a goddess.) The main character was likeable, sweet, and a little naive, but she realizes why she is naive and consciously works to overcome that.

The first book starts with a revelation – Emi has been training for ten years to receive her goddess into her body, with the expectation that their personalities will meld – only to discover that the goddess’s divine energy will instead destroy Emi’s mind and personality. She will be dead while the goddess inhabits her body. Which will be happening two months from the book’s beginning, so she doesn’t have much time to change her fate. The goddess herself is not unsympathetic, and wishes it could be different. I loved the interaction between Emi and her goddess. The compassion, love, and regret shown by Amaterasu means it’s impossible to dislike her, even though we know she’ll be the agent of our protagonist’s death. 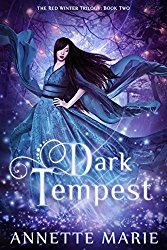 But all is not as it seems among the gods, and Emi is attacked by someone who should be an ally, and defended by those who should want her dead. Conspiracies unravel in the second book, as Emi and her friends race to finish the task set them by Amaterasu – a task that must be finished before the winter solstice, when Amaterasu will descend into Emi’s body and destroy her mind. Dark Tempest ends with the task still uncompleted, and Immortal Fire picks up immediately. (I read almost the entire trilogy in one sitting – I finally set the third book aside and got some sleep before the final confrontation.)

I don’t want to say too much, and I’m only going to include the description on the first book, because I don’t want to spoil anything. I liked Emi, I absolutely loved Yumei, the dark, standoffish Crow Lord, and Shiro the kitsune was an amazing character. Reveals and pacing and dialogue and action and exposition were all excellently done. This is a gorgeous, absorbing trilogy and I highly recommend it.

This is the second review for my Read Canadian Challenge, you can find the rest here:

From the back of Red Winter:

In a few short months, Emi’s mortal life will end when she becomes the human host of an immortal goddess. Carefully hidden from those who would destroy her, she has prepared her mind, body, and soul to unite with the goddess–and not once has she doubted her chosen fate.

Shiro is a spirit of the earth and an enemy of the goddess Emi will soon host. Mystery shrouds his every move and his ruby eyes shine with cunning she can’t match and dares not trust. But she saved his life, and until his debt is paid, he is hers to command–whether she wants him or not.

On the day they meet, everything Emi believes comes undone, swept away like snow upon the winter wind. For the first time, she wants to change her fate–but how can she erase a destiny already wrought in stone? Against the power of the gods, Shiro is her only hope … and hope is all she has left.

Annette Marie is the author of the Amazon best-selling YA urban fantasy series Steel & Stone, which includes the 2015 Goodreads Choice Award nominee Yield the Night. Her first love is fantasy, a limitless realm of creativity where she can break all the boring rules of real life, but fast-paced urban fantasy, bold heroines, and tantalizing forbidden romances are her guilty pleasures. She proudly admits she has a thing for dragons, and her editor has politely inquired as to whether she intends to include them in every single book.

Annette lives in the frozen winter wasteland of northern Alberta, Canada (okay, it’s not quite that bad). She shares her life with her remarkably patient, comparatively sensible husband and their furry minion of darkness — sorry, cat — Caesar. When not writing, she can be found elbow-deep in one art project or another while blissfully ignoring all adult responsibilities.

To find out more about Annette and her books, visit her website at www.authorannettemarie.com.