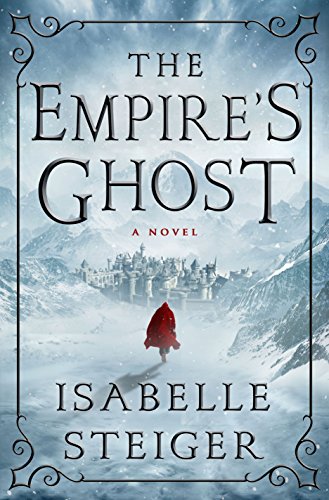 So I’ve had pretty good luck with debut novels, overall. (The Golem and the Jinni, The Crown’s Game, and The Thinking Woman’s Guide to Real Magic come to mind.) This one was good – not what I’d called spectacular, like those three, but good. If the sequel was out now, I’d read it. Knowing my reading habits, I probably won’t, because by the time the sequel does come out, I’ll have forgotten too much of this first book. (I strongly dislike only reading the first book in a series and then having to wait.)

What I really liked was how the author painted every character. Even the would-be Emperor, who is probably the closest to evil any character is in this book, was interesting and had clear motivations that made sense. I wouldn’t even call him evil, just ambitious. His assassin shows a different side in part of the book that also removes him from the “evil” category. I’m impressed that Steiger manager to set up several factions at odds with each other without making any of them evil. Wrong, perhaps, misguided perhaps, but not evil. Which is unusual in high fantasy.

What I disliked was there was a point in the middle where I had to set aside the book for real life – and I almost never picked it up again. Three days later, I finally did, but to me, that means I wasn’t invested in the characters or the story. I could have moved on to a different book, and I almost did. I liked most of the characters – but without liking any of them enough to truly care what happened. I also wish the pacing was a little faster, but that’s a victim of too many viewpoints, I think.

So I could go either way on this book. It was well-written but a little slow and didn’t just GRAB me the way some books do.

From the cover of The Empire’s Ghost:

The empire of Elesthene once spanned a continent, but its rise heralded the death of magic. It tore itself apart from within, leaving behind a patchwork of kingdoms struggling to rebuild.

But when a new dictator, the ambitious and enigmatic Imperator Elgar, seizes power in the old capital and seeks to re-create the lost empire anew, the other kingdoms have little hope of stopping him. Prince Kelken of Reglay finds himself at odds with his father at his country’s darkest hour; the marquise of Esthrades is unmatched in politics and strategy, but she sits at a staggering military disadvantage. And Issamira, the most powerful of the free countries, has shut itself off from the conflict, thrown into confusion by the disappearance of its crown prince and the ensuing struggle for succession.

Everything seems aligned in Elgar’s favor, but when he presses a band of insignificant but skilled alley-dwellers into his service for a mission of the greatest secrecy, they find an unexpected opportunity to alter the balance of power in the war. Through their actions and those of the remaining royals, they may uncover not just a way to defeat Elgar, but also a deeper truth about their world’s lost history.

Set in a fantastical world that is both welcomingly familiar and excitingly unique, The Empire’s Ghost shows nobles and commoners alike struggling to survive and maintain power in an ever-changing, chaotic world.