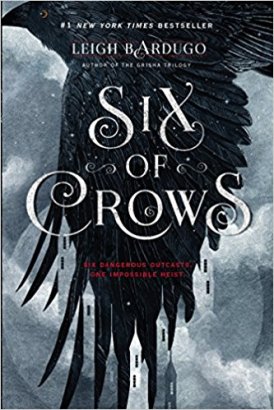 Six of Crows and Crooked Kingdom are a duology set in Leigh Bardugo’s Grishaverse. Grisha being the magic users in her world. I haven’t read the rest of the Grishaverse (Shadow and Bone, Siege and Storm, and Ruin and Rising) – but I will definitely be doing so, because Crows and Crooked Kingdom are AMAZING. I’m also looking forward even more to Bardugo’s Wonder Woman novel, Warbringer.

I was pretty surprised – normally books rotating between several viewpoints are confusing, but Bardugo handles the transitions seamlessly and unmistakably. I was never unsure of what character I was reading – each one really had their own unique voice. I also loved that she worked in an LGBT romance without it being in any way odd. No one in the novel found non-heterosexuality weird at all. It was treated just as matter of factly as opposite-sex romances, and I loved that.

Six of Crows opens on a gang being blackmailed into a job they don’t want to do. I can totally see the gang has a D&D group – and the books definitely feel a bit like a D&D campaign, albeit one with a mostly experienced group and a very experienced DM. 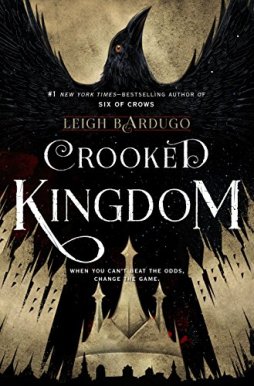 You’ve got Kaz, the ringleader, who’s an all-around great thief but a superb tactician.

Wylan, the rich merchant’s son on the outs with his father and fallen in with a bad crowd, and talented with demolitions.

Nina, the sexpot who wields magic, and has a love/hate relationship with Mathias, the barbarian who’s spent his life hunting magic users but is irresistibly attracted to Nina. (I can see the DM telling these two to hash out a background that will let them co-exist, which they obviously did.)

Each character has a complex back story that influences most of their actions, and different relationships with other members of the gang that also affects how they react. Their back stories don’t just explain their actions in the books, people and events from their backgrounds also show up to complicate matters in the present. The wheels-within-wheels of the plotline is EXACTLY what I love about good political fantasies. The world-building is superb, and Bardugo has given just as much thought to the seedy underbelly of her world as she has the magic and politics.

I really, really loved this duology, and I see now why people rave about this universe. It is VERY well deserved.

From the cover of Six of Crows:

Ketterdam: a bustling hub of international trade where anything can be had for the right price–and no one knows that better than criminal prodigy Kaz Brekker. Kaz is offered a chance at a deadly heist that could make him rich beyond his wildest dreams. But he can’t pull it off alone…

A convict with a thirst for revenge.

A sharpshooter who can’t walk away from a wager.

A runaway with a privileged past.

A spy known as the Wraith.

A Heartrender using her magic to survive the slums.

A thief with a gift for unlikely escapes.

Six dangerous outcasts. One impossible heist. Kaz’s crew is the only thing that might stand between the world and destruction―if they don’t kill each other first.

One thought on “Book Review: Six of Crows and Crooked Kingdom”