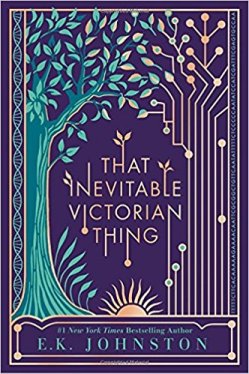 Representation, bitches! This book features a bisexual, intersex young woman. (I say woman, because she is female-presenting and uses female pronouns.) It also features a not-quite-love-triangle that turns into something more like polyamory. (Sorry, that’s a bit of a spoiler, but you can see it coming from a mile away, and the cover description heavily implies the same.)

It’s not realistic in the least – everything falls together nicely and it’s a bit of a “princess saves the day by virtue of being a princess” kind of plot. But the twist on the history is a very pleasant one – and making the British Empire an Empire that values diversity and the melding of cultures and not looking down on anyone because they’re different is a really nice change of pace. It’s a WONDERFUL bit of escapist fantasy given today’s world, I have to say.

I’d actually really like to see the darker side of this same world explored. One of the main plot points in the book is that there is a computer database of genetics. Everyone in the British Empire, when they turn 18, is encouraged to have their DNA sequenced and entered into the computer to find good genetic matches. They then have the opportunity to chat with those matches and eventually meet them. It’s accepted custom, and you’re definitely viewed as odd if you choose NOT to do it, though Helena’s parents were a love match and never had their DNA matched through the computer. Helena’s love interest is a boy she grew up with, she really only ran her DNA through the computer for kicks. So it’s not mandatory – except for royals. But that this computer and database exists leaves room for a darker side. What about genetic modification? Forced marriages for certain genetic outcomes? That has to be happening somewhere. That Inevitable Victorian Thing really only looked at the fun, light-hearted, good uses of this technology. I’d love to see the other side.

Oh – while the book definitely has a Victorian flavor, it’s definitely set in modern day, or perhaps a little past. It’s not Victorian era.

Fun little book. A good escape from a racist, homophobic world to a more diverse, accepting one. But a little TOO fluffy bunny for my personal tastes.

The book is set entirely in Ontario, making it part of my Read Canadian Challenge. You can find the rest of my Read Canadian books here:
1. An Astronaut’s Guide to Life on Earth
2. The Red Winter Trilogy
3. Station Eleven
4. The Courier
5. The Last Neanderthal
6. American War
7. Next Year, For Sure
8. this book!
9. All The Rage
10. The Clothesline Swing
11. Saints and Misfits
12. Tomboy Survival Guide
13. The Wolves of Winter

From the cover of That Inevitable Victorian Thing:

Set in a near-future world where the British Empire never fell – a surprising, romantic, and thought-provoking story of love, duty, and the small moments that change people and the world.

Victoria-Margaret is the crown princess of the Empire, a descendant of Queen Victoria I. The traditions of genetically arranged matchmaking will soon guide Margaret into a politically advantageous marriage and a life of duty. But first she’ll have one summer of freedom in a far corner of the Empire. Posing as a commoner in Toronto, she meets Helena Marcus, daughter of one of the Empire’s greatest placement geneticists, and August Callaghan, the heir to a powerful shipping firm besieged by American pirates. In a summer of high-society debutante balls, politically charged tea parties, and raucous country dances, Margaret, Helena, and August discover they share an extraordinary bond and maybe a one-in-a-million chance to have what they want and to change the course of history in the process.