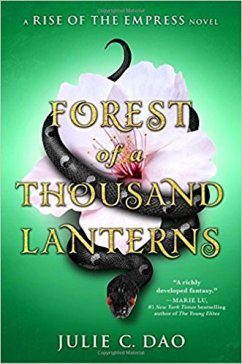 You know I love my Fairy Tales! Especially re-imagining the villains. Forest of a Thousand Lanterns is an Asian take on the evil queen from Snow White. The author is a Vietnamese American, and this is her debut novel. She has quite skillfully woven a new origin story for the wicked stepmother in a fantasy land heavily influenced by East Asian mythology and culture. I don’t know enough about the individual countries’ mythologies to tell you if the influences come specifically from Vietnam, or more generically from the area. I know that their beliefs can vary pretty wildly by locale.

That said, this is another superb debut novel. I’m eager to read the sequel – it’s billed as “A Rise of the Empress novel” so I’m sure there will be one or more. Xifeng is a pretty complex character – she is somewhat single-minded in what she wants, but conflicted in what to do to get it. (It being the position of Empress.) I was intrigued by who was chosen to fill the roles of the traditional tale; Xifeng, of course, would be the wicked stepmother. The Fool is Xifeng’s version of Snow White, and Xifeng thought for some time that she knew who The Fool was. The reader, of course, knows the Fool must be Snow White, and so not the people who Xifeng suspected. The one that surprised me was the identity of The Huntsman. I won’t spoil anything – but he was unexpected.

There’s also more going on than just the Snow White plot. There are gods and goddesses and spirits and an underlying war. I am quite eager to see how those play out.

There is a slow spot in the middle – I set the book down for a couple of days before picking it up again, and that’s always a sign I’m not as absorbed in the book as I could be. But I did pick it up again and read straight through to the end, so it’s not too bad!

If you like Fairy Tales and Asian mythology, this is definitely a neat blend of the two. I really liked it.

From the cover of Forest of a Thousand Lanterns:

Eighteen-year-old Xifeng is beautiful. The stars say she is destined for greatness, that she is meant to be Empress of Feng Lu. But only if she embraces the darkness within her.

Growing up as a peasant in a forgotten village on the edge of the map, Xifeng longs to fulfill the destiny promised to her by her cruel aunt, the witch Guma, who has read the cards and seen glimmers of Xifeng’s majestic future. But is the price of the throne too high? Because in order to achieve greatness, she must spurn the young man who loves her and exploit the callous magic that runs through her veins – sorcery fueled by eating the hearts of the recently killed. For the god who has sent her on this journey will not be satisfied until his power is absolute.

One thought on “Book Review: Forest of a Thousand Lanterns”