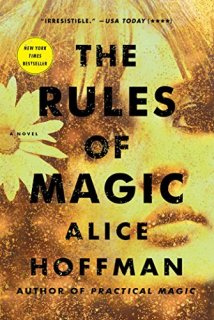 So I actually didn’t know that Practical Magic the movie was based on a book. But when I saw The Rules of Magic billed as the prequel to a movie I had loved, I knew I had to read it. And I’m so glad I did. The Rules of Magic is, well, magical. Magical and nostalgic and spell-binding. Most book worlds feel different than their respective movie-worlds, but this felt like a logical prequel. (It may be because I haven’t seen the movie in some time – I intend to remedy that soon, and I might just have to read the book as well.)

Practical Magic, the well known movie with Sandra Bullock and Nicole Kidman, centers around the two girls and their elderly aunts. The Rules of Magic is the aunts’ story. And what a story. It begins in New York, as the older of the two aunts is turning 17. On an Owens’ girl’s seventeenth birthday, they receive an invitation to spend the summer at the Owens home in Massachusetts. Frances, the older of the two girls, receives the invitation, and her two siblings won’t let her go alone, so all three of them (yes, three, the movie doesn’t mention their brother that I recall, though I suppose Bullock and Kidman’s characters had to come from somewhere!) pack up and head to Massachusetts, where they meet their Aunt Isabelle. Over the course of the summer, they learn their family history, and get verification that they are indeed witches. (They’d had certain powers throughout childhood, though their mother tried to deny it.)

It was Vincent’s storyline that intrigued me, since I knew where Frances and Jet ended up. There was an unexpected curveball that I won’t spoil here, but I enjoyed it. It was Jet and Frances’ storylines that had me crying at the end of the book, though. Not the very last chapter – it ended on a hopeful note – but the few chapters preceding it had me in tears. (It was midnight, and everyone else was asleep, so I had myself a good cry over my book, and then had to try to sleep on a wet pillow.)

If you enjoyed Practical Magic the movie, you should read this book. It’s a perfect prequel.

From the cover of The Rules of Magic:

For the Owens family, love is a curse that began in 1620, when Maria Owens was charged with witchery for loving the wrong man.

Hundreds of years later, in New York City at the cusp of the sixties, when the whole world is about to change, Susanna Owens knows that her three children are dangerously unique. Difficult Franny, with skin as pale as milk and blood red hair, shy and beautiful Jet, who can read other people’s thoughts, and charismatic Vincent, who began looking for trouble on the day he could walk.

From the start Susanna sets down rules for her children: No walking in the moonlight, no red shoes, no wearing black, no cats, no crows, no candles, no books about magic. And most importantly, never, ever, fall in love. But when her children visit their Aunt Isabelle, in the small Massachusetts town where the Owens family has been blamed for everything that has ever gone wrong, they uncover family secrets and begin to understand the truth of who they are. Back in New York City each begins a risky journey as they try to escape the family curse.

The Owens children cannot escape love even if they try, just as they cannot escape the pains of the human heart. The two beautiful sisters will grow up to be the revered, and sometimes feared, aunts in Practical Magic, while Vincent, their beloved brother, will leave an unexpected legacy. Thrilling and exquisite, real and fantastical, The Rules of Magic is a story about the power of love reminding us that the only remedy for being human is to be true to yourself.