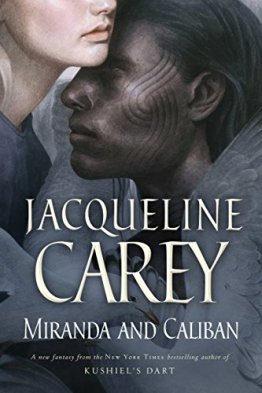 I love fairytale retellings, and Shakespeare retellings are usually pretty good, and this is from Jacqueline Carey, of Kushiel’s Dart, so it ought to be awesome, right? Well. It certainly wasn’t bad. But it also wasn’t as fantastic as I was expecting.

Miranda and Caliban is more of a prequel to Shakespeare’s Tempest than it is a retelling. It begins when Miranda is 6 – when she’s just aware enough to start remembering what’s happening on the island she and her father live on. The book details the childhood friendship of Miranda and Caliban, who was abandoned on the island as a child and had reverted back to “uncivilized” ways. Miranda and her father teach him their language, and how to behave like they do. As Miranda matures into a young woman, Caliban does, too, turning their childhood friendship into – something more, though Miranda is too naive to understand what’s going on.

Miranda’s father is the villain in this book, using Miranda for his own ends and abusing Caliban. Abusing them both, really. He’s a manipulative, gaslighting bastard. To be honest, none of the characters in this book are all that likable – Ariel is a backstabbing, untrustworthy jerk, Miranda is stubbornly, obnoxiously naive, and Caliban is bullish and closemouthed.

All that said, the book is well written, with a lyrical quality to it. It’s a logical prequel to The Tempest. If you liked The Tempest, it might be worth a read. If you’re not familiar with The Tempest at all, though, definitely give this a pass.

This fills the “book about a villain or antihero” for the PopSugar 2018 Challenge.

From the cover of Miranda and Caliban:

Miranda and Caliban is bestselling fantasy author Jacqueline Carey’s gorgeous retelling of The Tempest. With hypnotic prose and a wild imagination, Carey explores the themes of twisted love and unchecked power that lie at the heart of Shakespeare’s masterpiece, while serving up a fresh take on the play’s iconic characters.

A lovely girl grows up in isolation where her father, a powerful magus, has spirited them to in order to keep them safe.

We all know the tale of Prospero’s quest for revenge, but what of Miranda? Or Caliban, the so-called savage Prospero chained to his will?

In this incredible retelling of the fantastical tale, Jacqueline Carey shows readers the other side of the coin—the dutiful and tenderhearted Miranda, who loves her father but is terribly lonely. And Caliban, the strange and feral boy Prospero has bewitched to serve him. The two find solace and companionship in each other as Prospero weaves his magic and dreams of revenge.

Always under Prospero’s jealous eye, Miranda and Caliban battle the dark, unknowable forces that bind them to the island even as the pangs of adolescence create a new awareness of each other and their doomed relationship.