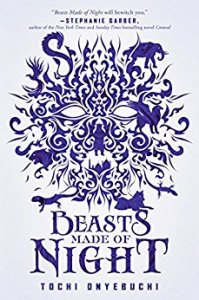 So this Nigerian-influenced fantasy made enough of a splash when it was released in October that I JUST got it in my hands from the library. That long wait….was not actually justified, sadly. The cover is GORGEOUS and the concept is really, really cool – the execution is lacking. I can tell that the author had the world pretty fleshed out in his mind, from the geography to the vocabulary – but he didn’t actually pass that knowledge on to the reader. Kos is a walled city, but I’m not sure whether the Palace is within the walls or not? In one scene our protagonist LEAPS out of the castle and runs back the city – but in another scene he mentions that looking out the castle wall, Kos fits behind his fingernail. Kos is made up of several neighborhood plus a market – it’s not small. So either his fingernail is HUGE or Kos is a pretty decent distance away. But it’s written as if it only takes him about ten minutes to run there? Not to mention that he cracked a rib in the room that he leaped from (which is never mentioned again).

Oh and he winds up landing in an ivy maze out of nowhere – he couldn’t see it from the palace? Let’s see….the King regularly bombards neighborhoods with catapults in what’s called a “baptism” but the people haven’t revolted against this, for some reason. They talk about something called a “kanselo” but never define it. I -think- it’s like an organized group or coalition, but I’m really not entirely sure.

The male protagonist treats every woman his age as a potential love interest, debating whether to give them his heart-stone, or whether people will think he’s already given one girl or another his heart-stone – but never stops to ask if the girls are interested in HIM that way. Because of COURSE they would be, right? He’s the Sky-Fist! The Lightbringer! The one whose tattoos never fade! (Eating sin-beasts causes a black tattoo to appear on your skin – on most sin-eaters these fade eventually.) Also he’s just DUMB. He recalls that the sin-eater who ate his mother’s sin had a certain tattoo, and when he runs across her years later, it takes him three or four encounters before realizing it’s the same sin-eater. (The tattoo is a spider. Covering her FACE. It hasn’t faded.) He makes stupid decisions – after nightmares of one love-interest being attacked by sin-beasts, he LEAVES HER SURROUNDED BY THEM to go run out into the city. He has at least FIVE love interests in this book. And only ONE of them seems interested in him in return.

I really wanted to like this book. The concept of sin-eating is great. But the main character and all the one-dimensional characters that surrounded him, along with the confusing geography, just turned me off. And I’m not even getting into the “ending.” Yeah. Definitely throwing quotes on that because that was not an ending. The book just stops.

Skip this. It was a terrible book wrapped in a deceptively pretty package.

It does tick off my “time of day in the title” prompt for the PopSugar 2018 Reading Challenge, though.

From the cover of Beasts Made of Night:

In the walled city of Kos, corrupt mages can magically call forth sin from a sinner in the form of sin-beasts—lethal creatures spawned from feelings of guilt. Taj is the most talented of the aki, young sin-eaters indentured by the mages to slay the sin-beasts. But Taj’s livelihood comes at a terrible cost. When he kills a sin-beast, a tattoo of the beast appears on his skin while the guilt of committing the sin appears on his mind. Most aki are driven mad by the process, but Taj is cocky and desperate to provide for his family.

When Taj is called to eat a sin of a member of the royal family, he’s suddenly thrust into the center of a dark conspiracy to destroy Kos. Now Taj must fight to save the princess that he loves—and his own life.

Debut author Tochi Onyebuchi delivers an unforgettable series opener that powerfully explores the true meaning of justice and guilt. Packed with dark magic and thrilling action, Beasts Made of Night is a gritty Nigerian-influenced fantasy perfect for fans of Paolo Bacigalupi and Nnedi Okorafor.