Top Ten Tuesday is hosted by That Artsy Reader Girl, and this week’s topic is “Books I’d slay a lion to get early!” 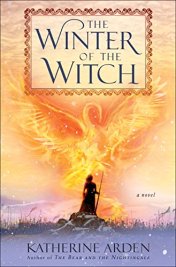 Copper. No cover image for either of those yet. (Update: the title for the Children of Blood and Bone sequel is Children of Virtue and Vengeance, due out in 2019!)

3. The Winter of the Witch, luckily, I don’t have to wait too much longer for, as it comes out in August. It’s the conclusion to the trilogy Katherine Arden started with The Bear and the Nightingale and The Girl in the Tower. You’d better believe I will spend August in the frozen forests of Russia!

4. The author of The Crown’s Game and The Crown’s Fate, Evelyn Skye, is coming out with a new series at some point, starting with Circle of Shadows. There’s no information on what it’s about, but it’s Evelyn Skye, it’s bound to be amazing!

5. Kingdom of the Blazing Phoenix, Julie C. Dao’s sequel to Forest of a Thousand Lanterns, is due out in November and I CAN’T WAIT.

6. Another one I don’t have to wait too much longer for is Endless Water, Starless Sky, the sequel to Bright Smoke, Cold Fire. Rosamund Hodge’s retelling of Romeo and Juliet is AMAZING and I can’t wait to see where it goes. It’s due out in July.

7. The next Tortall book! Tempests and Slaughter was excellent, as always, and I really hope the sequel will answer some questions left in the air with the first. There isn’t a title, or cover, or release date or anything yet. But Tamora Pierce is hard at work.

8. The Iron Season is supposed to be out sometime this year! It’s the sequel to The Golem and the Jinni, an enchanting debut novel I read several years ago. No title or cover art

yet. (Which makes me think it might not come out this year, as it was announced in 2015, and no word since then.)

9. The sequel to The Thinking Woman’s Guide to Real Magic is being worked on, but no title, cover, or release date. Someday? Please?

10. Starless by Jacqueline Carey. I have fond memories of Kushiel’s Dart, though after the first trilogy they became less interesting. Miranda and Caliban was okay. But I’ve read the first chapter of Starless when it was released online, and I am DYING to read the rest! It’s due out in June, so not too long to wait.

12 thoughts on “TTT: Top Ten Books I’d Slay a Lion to Get Early”