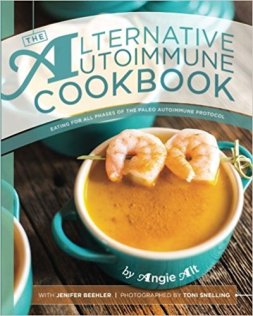 Well. It’s been a week. I haven’t talked about it much, but I’ve been on a very restrictive diet since the beginning of April. I have Hashimoto’s Thyroiditis and Hydradenitis Suppurativa, two auto-immune diseases, so after reading up on it for several months, I decided to take the plunge and start the AutoImmune Protocol, or AIP. And it’s been amazing! I’ve had so much more energy, and I haven’t been sleeping the days away (or falling asleep face down in my book!) I haven’t had random nausea, or heartburn – so many problems relieved by this diet. Even the brain fog has receded a lot.

I’ve been using these two cookbooks – The AutoImmune Paleo Cookbook and The Alternative AutoImmune Cookbook. They’ve been great, and the recipes are delicious.

But. It’s very restrictive, (no gluten, dairy, nightshades, legumes, eggs, seeds, nuts, grains, soy, and as little sugar as possible) so last weekend I experimented with reintroducing a couple of things. Cheese, mostly. It took a couple of days to react, and when I did, it was with the chronic fatigue. Which, of the symptoms I normally have, is honestly the easiest to deal with. So I’ve spent much of the last week sleeping instead of reading! I’m glad I had spent the last month or so reading faster than I was posting reviews – the backlog I had saw me through this week of inactivity. I’m getting better again, which is good because I have quite the stack of library books to get through! 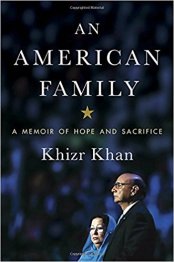 Tomorrow is Memorial Day, and I always have mixed feelings about the holiday. My husband served five years in the Marines, and a lot of people like to thank him or me for his service on this day, and it bothers me because I feel like Memorial Day is the day to remember those who DIED fighting our wars. And my husband is very much alive. (Thank the gods.) Thank him on Veterans Day. Or some other day. It’s also just that I spent five years afraid he wouldn’t come back to me, so whenever the military and its sacrifices are being celebrated in the media, I want to crawl in a hole and hide. That said, if you’re looking for a Memorial Day read, check out An American Family by Khizr Khan. When he talks about his son’s death I had to put the book down and ugly cry for a while because that is every military spouse’s absolute worst fear.

In happier news, I’m going to be attempting a Pride-focused Instagram photo challenge this month! If you don’t already follow my Instagram, you can find me at @goddessinthestacks. This is the challenge I’ll be trying to post along with! 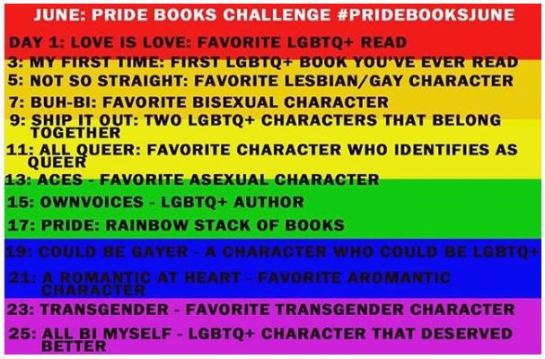 One thought on “Sunday Funday”