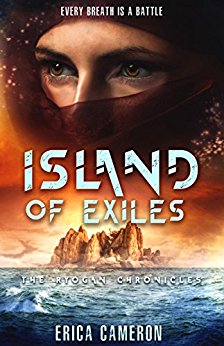 This is a great read for Pride Month! Khya’s society has three genders – male, female, and ebet. They’re all equal, though ebet aren’t capable of having children. The ebets’ pronouns are ey/eir/em. No one cares what gender anyone else is, and soul bonds, which seem to be the only form of long term bonding, can be made between any two people who love and trust each other enough, whether that’s romantic or not. Siblings can form a soul bond if they wish, it doesn’t imply a sexual relationship. The main plot line follows Khya, Tessen (the man who loves her), and Sanii, Khya’s brother’s ebet lover, as they try to rescue Khya’s brother. In the process, they learn things about their society that only the ruling class knows, and have to make some hard decisions.

Khya’s home, Itagami, is separated by castes: The Miriseh, ten immortal rulers, the Kaigo, the Council below them, the Nyshin, or warriors (anyone with strong magic), the Ahdo, or city guards (anyone with weak magic), and the Yonin, who don’t have any magic and are little more than drudges. Yonin aren’t really allowed to associate with the higher classes and are kept out of most places by magic. The only movement between castes is the few Nyshin who get elected to the Kaigo. I generally dislike societies that are so rigidly separated by castes, but that makes it all the more satisfying when people rebel, I suppose.

I enjoyed the world building and magic system – Khya, in particular, is a Warding Mage, and can shield people from things like projectiles, lightning strikes, and even from water, giving them air to breathe underwater. Khya’s a little prickly for a main character, but she comes around eventually.

The book was a finalist in the Speculative Fiction category of the Bisexual Book Awards, but did not win. (Full list of finalists and winners in the link above, as well as previous years’ lists – Fair Warning, my To-Read listed exploded.)

I thought this was a great book and will be looking up the sequel, Sea of Strangers.

From the cover of Island of Exiles:

In Khya’s world, every breath is a battle.

On the isolated desert island of Shiara, dying young is inevitable. The clan comes before self, and protecting her home means Khya is a warrior above all else.

But when following the clan and obeying their leaders could cost her brother his life, Khya’s home becomes a deadly trap. The only person who can help is Tessen, her lifelong rival and the boy who challenges her at every turn. The council she hoped to join has betrayed her, and their secrets, hundreds of years deep, reach around a world she’s never seen.

To save her brother’s life and her island home, her only choice is to trust Tessen, turn against her clan, and go on the run―a betrayal and a death sentence.