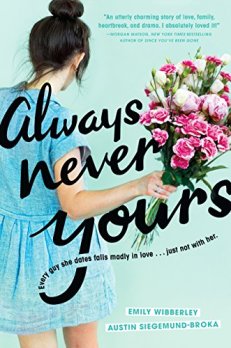 This is the fifth book from my summer TBR – I’m slowly working through them! I mused on the TBR list that this might remind me of high school, and so it did. Megan is much bolder than I ever was, and dated a lot more, but her underlying feelings of being passed over for other girls – oh, I felt those. I wasn’t very socially adept in high school, unlike Megan.

The premise of the story is that every guy Megan dates falls madly in love with the girl he dates after Megan. This has happened enough that she’s come to expect it, so when her last boyfriend broke up with her to date her best friend, she wasn’t even very upset with them. She understood. That’s what her boyfriends DO. Which means she approaches relationships as temporary, and doesn’t bother to fight for them when they end.

The book is really about learning what’s worth fighting for. A family that seems to be moving on without her? A role in a play that her understudy fills better than she does? A boy who will go on to find his true love after her? A best friend who stole her boyfriend? Megan struggles with feeling imminently replaceable and misunderstood, and her vulnerability grabbed my heartstrings and yanked. I wasn’t expecting to, but I LOVED this book.

Megan’s worries are so very real, and her friends are such quintessential high schoolers. Every look, every word, every relationship has so much more intense meaning at that age because EVERYTHING is so important and felt so deeply. I loved how supportive Megan is of her friends, even if she doesn’t always realize that she comes across a little strong. I liked the side plot of Megan’s gay friend Anthony, and the closeted boy he has a crush on.

As a Shakespeare lover, I enjoyed that each chapter started with a line from Romeo and Juliet, the play that Megan’s school Drama department is performing her senior year. I also enjoyed seeing the comparisons between Megan and Rosaline, and characters in the book saying how interesting Rosaline is as a character, even though we don’t actually see her in the play! It reminded me of Bright Smoke, Cold Fire, which is a VERY different book, but another one that delves further into the character of Rosaline. And now I’m wondering if there are any other books that do the same….

I loved this book. It made me cry but then laugh through my sniffles. Books that can do that are special things.

From the cover of Always Never Yours:

Shouldn’t a girl get to star in her own love story?

Seventeen-year-old Megan Harper is about due for her next sweeping romance. It’s inevitable – each of her relationships starts with the perfect guy and ends with him falling in love . . . with someone else. But instead of feeling sorry for herself, Megan focuses on pursuing her next fling, directing theater, and fulfilling her dream college’s acting requirement in the smallest role possible.

So when she’s cast as Juliet (yes, that Juliet) in her high school’s production, it’s a complete nightmare. Megan’s not an actress, and she’s used to being upstaged – both in and out of the theater. In fact, with her mom off in Texas and her dad remarried and on to baby #2 with his new wife, Megan worries that, just like her exes, her family is moving on without her.

Then she meets Owen Okita, an aspiring playwright inspired by Rosaline from Shakespeare’s R+J. A character who, like Megan, knows a thing or two about short-lived relationships. Megan agrees to help Owen with his play in exchange for help catching the eye of a sexy stagehand/potential new boyfriend. Yet Megan finds herself growing closer to Owen, and wonders if he could be the Romeo she never expected.

In their fresh and funny debut, Emily Wibberley and Austine Siegemund-Broka break down the high school drama to find there’s always room for familial love, romantic love, and – most importantly – self-love.