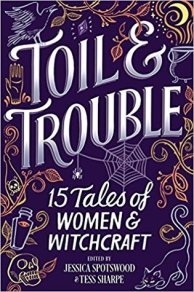 Toil & Trouble was a much-hyped anthology of YA stories, and I think it lived up to that hype. I really enjoyed almost every story in this book – only one or two of them were less than awesome. And they still weren’t bad! Anthologies like this keep introducing me to yet more authors that I want to read, and just keep growing my TBR list! Some of the authors in this book I was familiar with; while I hadn’t read her work yet, I met Zoraida Córdova at the Baltimore Book Festival, and she was amazing. I’m familiar with Brandy Colbert’s work, and have not yet read Anna-Marie McLemore but desperately want to, and her story in this work (Love Spell) only increases that need.

I read this book just before Halloween, and it was a perfect choice. I’m not a fan of actual horror novels, which seem to be what everyone else is reading this time of year. Give me my strong witchy women! The stories in this book are all young women – teens to early adulthood – learning to rely on themselves. They embrace what family traditions mean to them, or break free of them entirely if they’re the wrong path. They break social taboos and fall in love where they will. They FIGHT for what they want.

I think my favorite story in this book involved a woman whose powers had been bound by her coven until she was old enough to use them wisely, but had to watch her father die in an accident when she could have healed him if she’d had access to her magic. She went to an ancient place of power in the mountains and broke the binding, horrifying her coven. The story is actually about her defying them further in refusing her destined soul mate for the girl she’s been in love with since she was a child, and Fate’s punishment for that. The two girls fighting for each other and for their own magic was amazing. (The Heart in Her Hands, Tess Sharpe.) Unfortunately it doesn’t look like it’s part of a larger story, I was hoping for more in that world!

As far as I can tell, only one of the stories is part of something larger – I’m pretty sure Zoraida Córdova’s story is part of her Brooklyn Brujas world. Other than that, they all appear to be standalones, which is a little sad as I’d like to see more of many of these worlds!

Toil & Trouble is an outstanding anthology of magical women, and I loved it.

From the cover of Toil & Trouble:

History is filled with stories of women accused of witchcraft, of fearsome girls with arcane knowledge. Toil & Trouble features fifteen stories of girls embracing their power, reclaiming their destinies and using their magic to create, to curse, to cure – and to kill.

A young witch uses social media to connect with her astrology clients – and with a NASA-loving girl as cute as she is skeptical. A priestess of death investigates a ritualized murder. A bruja who cures lovesickness might need the remedy herself when she falls in love with an altar boy. A theater production is turned upside down by a visiting churel. In Reconstruction-era Texas, a water witch uses her magic to survive the soldiers who have invaded her desert oasis. And in the near future, a group of girls accused of witchcraft must find their collective power in order to destroy their captors.

This collection reveals a universal truth: there’s nothing more powerful than a teenage girl who believes in herself.