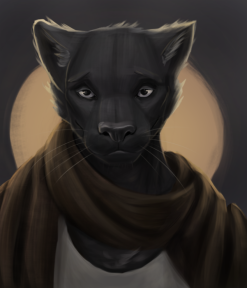 So I have a Catfolk Assassin (Ninja) in a Pathfinder game that has gotten so into my head that I’ve been writing short fiction about her downtime. I’ve written enough that I’m considering writing a few more about the beginning of her story and major plotpoints and running it as a weekly series here on Sundays. It’s kind of a major change, because I haven’t posted any of my creative writing here on the blog, just reviews, but I’m pretty proud of my little peeks into her world, and my DM, at least, thinks they’re really good. (He’s my husband, though, so maybe he’s biased?)

I don’t know, would any of you be interested in the story of a young catfolk, traumatized by the murder of her entire clan at the hands of a fascist government, escaping into another country to make a life for herself far away from everything she’s ever known?

So far she has found a new goddess, found a group of adventurers that seem to like her, taken out some goblins, a couple of demons, and some ghouls, and died, talked to her goddess, and come back with a newfound commitment to her purpose. Our D&D group resumes meeting January 2nd, so we’ll see where her story goes from there!

One thought on “Sunday Funday”