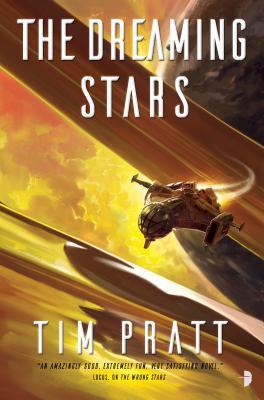 I don’t read a lot of hard sci-fi. It’s just not where my interests lie. But every once in a while, I do enjoy a good space opera. Firefly/Serenity (before I learned about the Confederate connection, dammit), Dark Matter, even the occasional episode of The Expanse. Tim Pratt has written a fantastic space opera in his Axiom series. (The Forbidden Stars should be coming out sometime in 2019.) The story started with The Wrong Stars and continues here.

First, the diversity is fantastic. The crew runs the gamut of genders, sexualities, ethnicities, and religions. Our two main characters, Captain Machedo and Elena, are both bisexual women, and the Captain is also demisexual. (One of the first things she does in this book is crash her own funeral being held by her ex-husband!) I enjoyed seeing Elena and Callie’s relationship continue to grow.

Second, the dialog is hilarious. The Captain and her ship’s AI are both smart alecks, and sarcasm and snappy comebacks abound.

The action is also very well-done; the physics of traveling through space aside, most of the science is feasible. All of the Axiom-tech is pretty far out, and some of the other science is….well it’s such a long shot that it only worked because it’s in a book, but it IS conceivable it could work.

This is one sci-fi series I will continue to watch for. (And I wonder how long before it gets optioned for TV?)

From the cover of The Dreaming Stars:

In the breathtaking sequel to The Wrong Stars, Tim Pratt brings you much closer to that ancient race of aliens, the Axiom, who will kill us all – when they wake up.

In deep space, a swarm of nanoparticles threatens the colonies, transforming everything it meets into computronium – including the colonists. The crew of the White Raven investigate, and discover an Axiom facility filled with aliens, hibernating while their minds roam a vast virtual reality. The treacherous Sebastien wakes up, claiming his altered brain architecture can help the crew deactivate the swarm – from inside the Axiom simulation. To protect humanity, beleaguered Captain Callie Machedo must trust him, but if Sebastien still plans to dominate the universe using Axiom tech, they could be in for a whole galaxy of trouble.