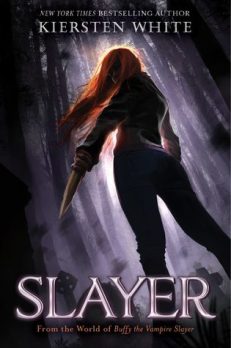 The Friday 56 is hosted by Freda’s Voice. The rules are simple – turn to page 56 in your current read (or 56% in your e-reader) and post a few non-spoilery sentences.

This week’s quote is from Slayer by Kiersten White. Slayer is set in the world of Buffy the Vampire Slayer, after the events of the comic book season that came after the TV show. (I’m a bit of a fan.)

Artemis had been even more affected by the test. When she had come back, she’d looked . . . haunted. “I don’t want to be a Watcher,” she had said. But being a Watcher was what she had always wanted. I couldn’t wrap my head around her not being on the Council someday in the distant future. In my mind, she already was.

When I tried to talk to her about the test, she refused. For the last four years she had been there for me, but I didn’t know how to offer her the same support, so I pretended like nothing was different. She let me. It was easiest for both of us.

On a side note, WE ARE CLOSING ON THE HOUSE TODAY. IN A FEW HOURS I WILL BE A HOMEOWNER!!!!