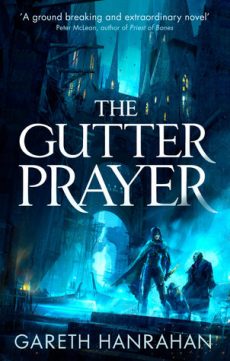 The Friday 56 is hosted by Freda’s Voice. The rules are simple – turn to page 56 in your current read (or 56% in your e-reader) and post a few non-spoilery sentences.

This week’s quote is from The Gutter Prayer, a fantasy novel by Gareth Hanrahan. In some ways it’s urban fantasy, as it’s set in a city that is very much a character in the novel – but it’s definitely more high fantasy than today’s “urban fantasy” genre.

They descend into darkness. He leads her by a circuitous route, for there are no straight paths down here, just a choice of labyrinths. She stumbles on rough floors and loose bones. She tries keeping one hand pressed to the tunnel wall, so he brings her under one of the city’s sewage works, down paths where the walls ooze black, and after that she keeps her hands to herself, her only tether to the surface Rat’s infrequent commands. Alchemical waste slithers past her legs, half-alive piles of pus that sprout blind eyes and hairy whiskers. They pass through abandoned sections of the city, and through still-inhabited ones. A door leads them into the cellar of a tavern, and he whispers to her to stay quiet as they pass beneath a room full of dock workers breaking their fasts. She can move surprisingly quietly when she has to, but otherwise she’s loud as a sewer boar in the tunnels. He can tell when she bumps or brushes against a new obstacle by each fresh profanity.