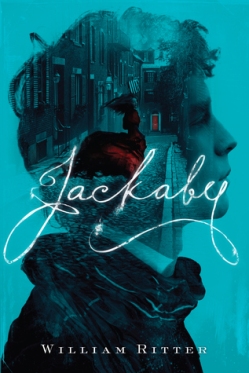 I don’t remember why this book was recommended to me, but it’s been languishing in my library stack for at least a couple of months now. I finally got around to reading it – and it’s delightful! There are three more books and a novella in this series, and the author has apparently started another fantasy series.

Jackaby is told from the viewpoint of Abigail Rook, an English miss who ran away from home in search of adventure. The book opens on her arrival in America, by way of the Ukraine and Germany. The only work she can find in this new town is as an assistant to Jackaby, a distinctly odd character who claims to see things no one else can. Abigail, however, begins to believe him, and accompanies him to a murder scene, where she spots mundane details that he had overlooked. With Jackaby spotting supernatural things that no one else can, and Abigail taking note of more mundane details that Jackaby misses, the two make a formidable team.

Jackaby, of course, has that infuriating habit of not telling Abigail all the things he knows, which leads to her not mentioning useful details because she didn’t know they were useful. I’m hopeful, now that she’s earned his trust, that in future books they will communicate better and work together more seamlessly.

The worldbuilding here seems to take “America as a melting pot” into the supernatural world as well, with creatures from various cultures migrating with their humans to America. Jackaby has a rather improbable knowledge of this huge variety of creatures, as well as a library to look up more obscure facts that aren’t already in his labyrinth of a mind.

I liked that Abigail wasn’t portrayed as stupid; she’s a bit ignorant of the supernatural world, but she didn’t know it existed until Jackaby, and she’s learning quickly. She also can’t see it like he can, so she of course misses some things that he thinks are obvious. He could be a little better about remembering that not everyone can see the supernatural, though.

The cover mentions that it’s Dr. Who meets Sherlock, and that’s a very apt description. Jackaby is VERY Dr. Who like, with the bustling energy and quick mind that comes off as arrogant but is more…oblivious, really. Abigail fills the companion role, along with a certain policeman that I’m hoping shows up in the following books as well. I will have to track those down and find out!

From the cover of Jackaby:

Newly arrived in New Fiddleham, New England, in 1892, and in need of a job, Abigail Rook meets R. F. Jackaby, an investigator of the unexplained with a keen eye for the extraordinary – including the ability to see supernatural beings. Abigail has a gift for noticing ordinary but important details, which makes her perfect for the position of Jackaby’s assistant. On her first day, Abigail finds herself in the midst of a thrilling case: A serial killer is on the loose. The police – with the exception of the handsome detective Charlie Cane – are convinced their culprit is an ordinary villain. Jackaby is certain the foul deeds are the work of an inhuman creature, the likes of which the authorities are adamant to deny.

Doctor Who meets Sherlock in a debut novel, the first in a series, brimming with cheeky humor and a dose of the macabre.

One thought on “Book Review: Jackaby”