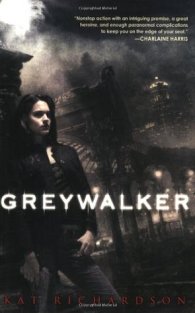 I didn’t want to call this a series review, because there’s currently nine books in the series, and I’ve only read two of them. So this is a review of the first two books in the Greywalker series, because I don’t plan on reading more. I know that sounds ominous! Bear with me.

So Greywalker begins with our heroine, Harper, nearly being killed by a dude she’s been investigating. Well. Not nearly. She does die, but the EMTs bring her back. This experience gives her the ability to see into the Grey – a kind of fuzzy otherworld full of ghosts and other, scarier beings.

Now, this is a cool concept. I’m down with this. My problem, I think, is that Harper just seems to take this in stride. She finds a couple of people who know about the Grey, and teach her how to use it. But I feel like she never really emotionally dealt with this giant change. It felt like she basically went “Huh. Okay. That’s a thing. I need to learn how to use this.” She just went back to being a PI with this new ability. Fifty pages in, she’s back to investigating cases. It would be one thing if these were flashbacks – if the assault had happened prior to the book opening, and she’d done the emotional work. But to have the book open with that, and expect us to believe she’s just – okay with this? That a human could wrap their brain around this news so quickly? I don’t know. That requires a LOT of suspension of disbelief. 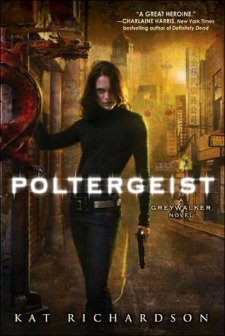 If I ignore the start, and the fact that she’s brand new to being a Greywalker and should be dealing with that, the rest of the book is a pretty standard urban fantasy mystery. I liked the world-building and the different takes on supernaturals. Vampires are, rightly, TERRIFYING. Despite being the protagonist, Harper is not magically immune to vampire wiles, which is a nice change. Personally, though, Book One is just spoiled for me because there should be a lot more emotional fallout. The character just falls flat and seems unrealistic.

The second book is better; possibly simply because this isn’t new for her by now, so I’m not expecting emotional work from her. The investigation seems more focused, and less scattered all over the place. It’s still pretty standard urban fantasy, though.

Overall, the concept is interesting, but the execution is lacking. It’s possible the series gets better in later books, but I’ve read two and just don’t have the desire to spend more time with Harper. She’s flat, lacks emotional depth, and is just uninteresting. I’m moving on to other books.

From the cover of Greywalker:

Harper Blaine was your average small-time PI until a two-bit perp’s savage assault left her dead – for two minutes, to be precise.

When Harper comes to in the hospital, she begins to feel a bit…strange. She sees things that can only be described as weird – shapes emerging from a foggy grey mist, snarling teeth, creatures roaring.

But Harper’s not crazy. Her “death” has made her a Greywalker – able to move between our world and the mysterious crossover zone where things that go bump in the night exist. And her new gift (or curse) is about to drag her into that world of vampires and ghosts, magic and witches, necromancers and sinister artifacts . . .

Whether she likes it or not.

From the cover of Poltergeist:

In the days leading up to Halloween, Harper’s been hired by a university research group that’s attempting to create an artificial poltergeist. The head researcher suspects someone is faking the phenomena, but Harper’s investigation reveals something else entirely: They’ve succeeded.

When one of the group’s members is found dead in a brutal and inexplicable fashion, Harper must determine whether the killer is the ghost itself . . . or someone all too human.

One thought on “Book Review: Greywalker and Poltergeist”