Top Ten Tuesday is a weekly meme hosted by That Artsy Reader Girl. This week’s theme is your top ten unpopular bookish opinions, but I could only come up with two. Since it’s still Pride Month, and the next couple weeks are on “second half of 2019 releases/summer TBR list” I’m going to do the ten upcoming LGBTQIA+ releases I’m looking forward to instead! (The downside to writing this post is that I discovered several LGBTQIA+ releases from the FIRST half of 2019 that are now on my TBR list. Whoops.) If you’re looking for unpopular bookish opinions, though, Artsy Reader Girl will have a linky with everyone participating this week. On to my list! 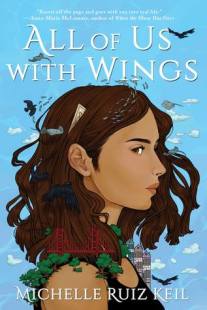 All of Us With Wings by Michelle Ruiz Keil (June 18) – an #ownvoices YA fantasy with a bisexual Mexican/American MC.

Technically, You Started It by Lana Wood Johnson (June 25) – this YA romance has a demisexual main character (YAY!) and a bisexual love interest.

Destroy All Monsters by Sam J. Miller (July 2) – an adult magical realism tale, dealing with heavy topics like child molestation and PTSD. I got to meet Sam Miller at the Baltimore Book Fest last year, and he’s awesome. (Though I still haven’t managed to read Blackfish City – oops.)

Shatter the Sky by Rebecca Kim Wells (July 30) – a YA fantasy with dragons and rebellion. Sign me up.

Of Ice and Shadows by Audrey Coulthurst (August 13) – the sequel to Inkmistress and Of Fire and Stars.

Crier’s War by Nina Varela (October 1) – debut F/F fantasy between a human girl and a Made one. (They appear to be automatons made originally to be playthings before they rebelled?) Looks awesome.

Orpheus Girl by Brynne Rebele-Henry (October 8) – another debut, this one re-imagining the Orpheus story as an F/F love story in Texas. I’m hearing conflicting reports about it though, so I’m not sure if I’ll pick it up or not.

The Never Tilting World by Rin Chupeco (October 15) – billed as Frozen meets Mad Max, this fantasy is the next book from the author of The Bone Witch Trilogy, which I loved.

Tarnished are the Stars by Rosiee Thor (October 15) – queer sci-fi fantasy about a girl with a clockwork heart.

Gideon the Ninth by Tamsyn Muir (September 10) – this book had me at lesbian necromancers. Lady necromancers are kind of my THING. Soooo yeah. A lady necromancer and her reluctant swordswoman? Yeah I need this book YESTERDAY. (And that cover. Hot damn.)