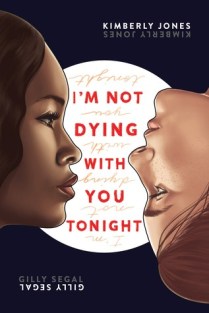 I read this book with the intention of going to Barnes & Noble’s Young Adult Book Club last Thursday (and taking a break from my in-laws!) but the GOP decided to have their House GOP Retreat in the Hotel directly behind my local Barnes & Noble, and Trump came to town to speak at the dinner the SAME NIGHT AS BOOK CLUB. Between the extra security for that, and the protests surrounding it, I wasn’t setting foot in the area that day. So that was disappointing – but this book was not.

I’m Not Dying With You Tonight is told from two very different perspectives.

Campbell is a white girl whose father owns a hardware store downtown. To most people, she looks well off, but she knows the hardware store is only barely staying afloat. Her mother recently moved to South America, leaving her to switch schools and live with the father she barely knows, in a new town. She’s a fish out of water in more ways than one.

Lena, on the other hand, knows the town, and the people. She’s a black girl with a plan to make it big, between her fashion sense and her boyfriend’s musical talent. She’s one of the popular girls at school, and has the kind of easy confidence that can be intimidating.

The two girls are thrown together by chance when a high school football game sparks a riot that soon engulfs the town. Again and again, we see Lena’s knowledge make up for Campbell’s naiveté about the town and its issues, but then over and over we see Lena’s strengths become utterly useless because of her skin color, requiring Campbell to step up for them both. Campbell’s not a damsel in distress, but she is definitely the weaker of the two, and I think the point about all of Lena’s strengths being ignored by racist white people is well made.

I’ve never been in a riot, so I can’t say for sure, but the chaos and non-stop anxiety of Lena and Campbell’s journey through town seems like an accurate description. It’s a quick read partly because the action and danger drives you through the book, looking for safe harbor that isn’t found until the last few pages.

I understand why the book ended where it did, but I’m a little dissatisfied by it. I’d like to know how the experience shapes the two girls (and Lena’s boyfriend) going forward. Do they become friends after this? Does Lena’s boyfriend shape up his act? How does this change the three of them? The answers aren’t necessary for the story, but I’d still like to know!

Ultimately, I enjoyed the book. It follows my trend of diverse young adult books that teach hard topics. Really the only change I’d like to see was a little more denouement at the end!

From the cover of I’m Not Dying With You Tonight:

Lena has her killer style, her awesome boyfriend, and a plan. She knows she’s going to make it big. Campbell, on the other hand, is just trying to keep her head down and get through the year at her new school.

When both girls attend the Friday-night football game, what neither expects is for everything to descend into sudden mass chaos. Chaos born from violence and hate. Chaos that unexpectedly throws them together.

They aren’t friends. They hardly understand the other’s point of view. But none of that matters when the city is up in flames, and they only have each other to rely on if they’re going to survive the night.

One thought on “Book Review: I’m Not Dying With You Tonight”