So I THOUGHT I had written up a post a long time ago featuring our visit to Poe’s grave, and I was going to link it today in a post about the International Edgar Allan Poe Festival happening this weekend in Baltimore, but it turns out I never wrote that post!

So today will be a combo Festival recap and Literary Landmark post! I’d like to make these a sporadic feature, the only one I’ve done before was on F. Scott Fitzgerald’s grave in Rockville, Maryland.

The view down one leg (of two) of the Poe Festival.

First, the Poe Festival. I believe this is the second year they’ve held it; I didn’t make it to last year’s. It’s held in the street in front of the Poe House, which I sadly neglected to get pictures of, as I thought I’d taken pictures when we toured it several years ago. AGAIN I WAS MISTAKEN. The only Poe House I have pictures of is the one in Philadelphia. (Tell me I posted that one…*combs through old posts* Ah ha! I found it as part of my Philadelphia trip post.) So it looks like we’ll need to make time to tour the Baltimore Poe House again some time, and get pictures this time. We’ve also decided we really need to get down to Richmond and see their Poe museum, so we can complete the trifecta!

The Poe Festival wasn’t real big; it was basically two small blocks, with a writer’s stage and a performance stage, and a couple of food booths on the other side of the performance stage. I don’t know how big it was last year, but I’m hoping it will expand. (And we were only going to the free stuff, there were paid tours and a ball of some sort.) There was a lot of neat art, some local authors selling books, and a couple of Poe-themed beer companies. The Richmond museum had a booth there, as did the Poe Society, who had printed leaflets of lectures that have been given on the study of Poe’s works. What I did NOT see, surprisingly, was anyone selling complete copies of actual Poe. Isn’t that weird? I’m going to Barnes & Noble on Wednesday for Book Club, I’ll have to pick up one of their gorgeous collectible copies to match the others we have. 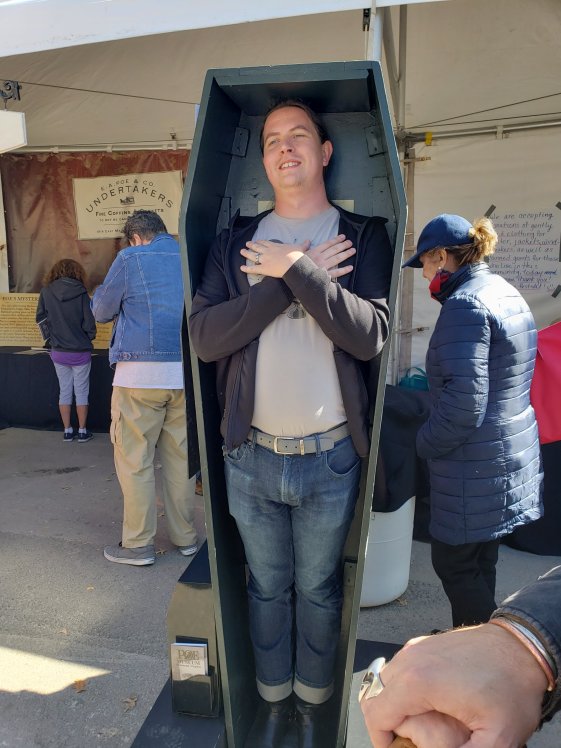 The Richmond Museum’s booth included a mini-exhibit on period coffins at the time of Poe’s death, including this one that they welcome people to step into. (Currently occupied by my husband, with his hands crossed over his Poe shirt, so you can’t see it!) It’s – rather claustrophobic. The man’s hand you see in the foreground with a ring is clasped around the top of a cane; I did not get a name, but he had amazing semi-period dress on, and I SHOULD have gotten a picture! I always realize later there are more things I should have gotten pictures of. I DID get a picture of this fantastic man with his art, though: 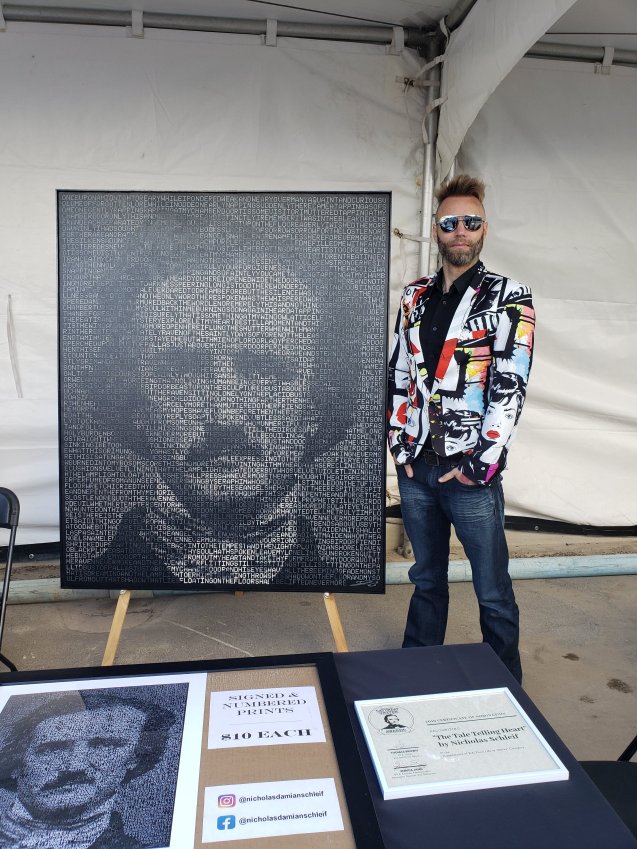 That is a portrait of Poe overlaid with the text of The Raven! We bought a print to go in my reading nook, because it’s amazing. If you can’t read his contact information there, it’s @nicholasdamianschleif on Facebook and Instagram. He might still have some for sale on his Facebook if you want one for yourself!

A few more photos from the festival:

And since I never posted about Poe’s grave, some photos from Westminster graveyard, the site of Poe’s grave. 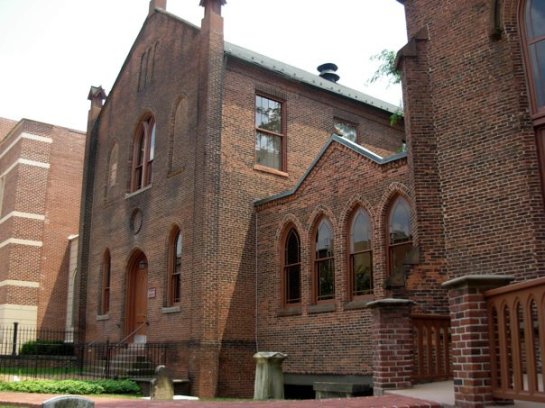 The church is gorgeous, with beautiful brickwork. It’s not as ornate as some churches in Baltimore, but it’s pretty magnificent nonetheless. The graveyard itself is really pretty, too: 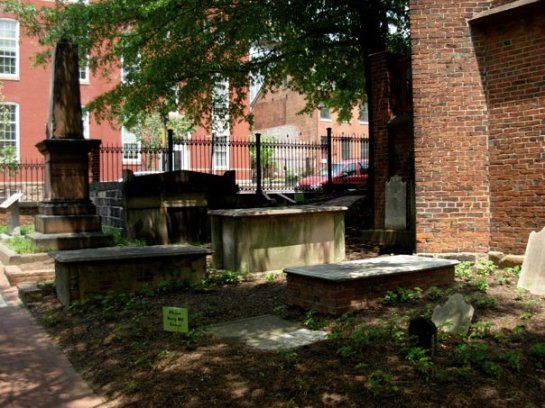 There’s a crypt around the corner with some other interesting people in it, but Poe’s grave is what we’re here for, right? We have his original gravestone: 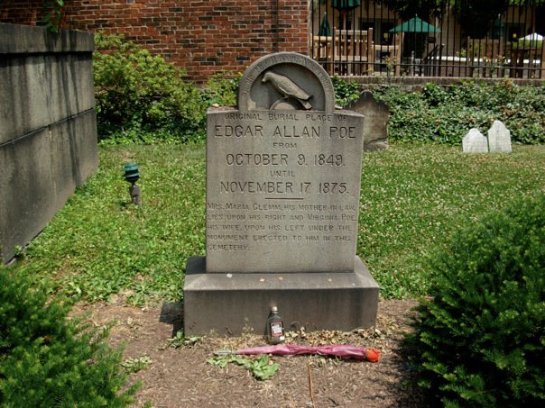 And then at some point he was dug up and reburied next to his mother-in-law/aunt and his cousin/wife. There’s a big white monument for them:

There are historical plaques all over the graveyard, but I didn’t get very good shots of them. I’ve gotten better at that over the years, but here’s a partial:

It was also summer, and shade wasn’t cooperating. It might be worth it to go visit sometime this winter when there won’t be any leaves on the trees to shade the signs!

We had a pretty fun day yesterday, and we’re at the Renaissance Festival again today, working at Tiger Torre Art. Feel free to come say hi if you’re in the area!