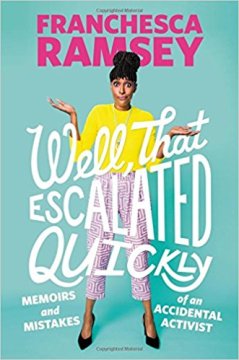 Well, That Escalated Quickly: Memoirs and Mistakes of an Accidental Activist
by Franchesca Ramsey
Memoir/Comedy
244 pages
Published May 2018

Anyway. While I didn’t like Ramsey’s book as much as I did Trevor Noah’s or Tiffany Haddish’s books, I did really enjoy it. I didn’t really know who Ramsey was before reading her book, and that might be why I didn’t like it quite as much. This book deal with internet culture a lot more than the other two do; and that pertains to my interests. What I really enjoyed is that she talks about her missteps, how she was criticized for them, and admits that she was wrong and much of the criticism was needed. She explains how she corrected her own behavior in response and strove to be better, and that’s something we don’t see a lot of. We see half-hearted apologies and no change in behavior from a lot of internet celebrities, and Ramsey definitely tries her best to rectify her mistakes. I really liked reading about her experiences with that, as it can be such a touchy issue. No one likes to be called out. But sometimes we need to be so we can learn to be better.

This is the third book I’ve read from my Summer TBR list.

From the cover of Well, That Escalated Quickly:

Franchesca Ramsey didn’t set out to be an activist. Or a commentator on identity, race, and culture, really. But then her YouTube video “What White Girls Say . . . to Black Girls” went viral. Twelve million views viral. Faced with an avalanche of media requests, fan letters, and hate mail, she had to make a choice: Go all in or step back and let others frame the conversation. After a crash course in social justice – and more than a few foot-in-mouth moments – she realized she had a passion for breaking down injustice in ways that could make people listen, laugh, and engage.

Ramsey uses her own experiences as an accidental activist to explore the ways we communicate with one another – from the highs of bridging gaps and making connections to the many pitfalls that accompany talking about race, power, sexuality, and gender in an unpredictable public space . . . the internet.

A sharp and timely collection of personal essays, WELL, THAT ESCALATED QUICKLY includes Ramsey’s advice on dealing with internet trolls and low-key racists, confessions about being a former online hater herself, and her personal hits and misses in activist debates with everyone from bigoted Facebook friends and misguided relatives to mainstream celebrities and YouTube influencers. Alongside useful guides to unfriending and a glossary of “not so simple concepts,” Ramsey shows readers that mistakes are inevitable, but what’s important is how we learn from them to make a better world. 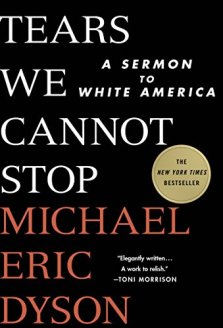 I’m always trying to continue to educate myself on my white privilege, America’s racist history, and civil rights and activism in general. Tears We Cannot Stop fits neatly into that category, but it’s not an easy-to-read book. I mean, it is – in the sense that it’s well-written and flows very well. But it’s not easy to read because of what it says. Dyson is a black pastor, and he wrote this book as if he was preaching to the white people of America, trying to make them understand the plight of the minorities we oppress. Black people specifically.

It’s a short book, but a very powerful one. It’s separated into sections like a sermon would be, with a Call to Worship, Hymns of Praise, Scripture Reading, the Sermon, a Benediction, and more. He’s correlated these sections of a sermon with that of the book – The Offering Plate, for example, is a short little section talking about how one university – Georgetown – apologized for their past use of slavery, and established an institute to study slavery and its effects. Tried to make reparations, in a way. In the scripture reading he quotes a lot of Martin Luther King. In the Benediction he actually talks about a lot of other books to read about the subject of slavery, all of which I’ve added to my already extensive Goodreads shelf on the subject of civil rights and activism. (I’ll be attempting to read as many of those books as I can.)

Tears is a really good opening book to read on the topic, especially for white people. It’s eye-opening, and both invites and provides guidance for further investigation into just how big of a mess we’ve made of things in this country. I highly recommend it.

And, if you happen to be local to Baltimore, the author will be speaking at the Baltimore Book Festival this Friday, September 22nd! Unfortunately, I can’t make it on Friday, so I’m going on Sunday. Sunday I’m planning to catch Daniel Jose Older, the author of the Bone Street Rumba series and Shadowshaper, and Kevin Shird, the author of Uprising in the City, about the Baltimore Riots in 2015 after the death of Freddie Gray. I’m really excited about it, even if it is going to be the hottest day we’ve had in a couple of weeks. (Still only mid-80s, though, so it could be worse!)

From the cover of Tears We Cannot Stop:

As the country grapples with racial division at a level not seen since the 1960s, one man’s voice is heard above the rest. In his New York Times op-ed piece “Death in Black and White,” Michael Eric Dyson moved a nation. Now he continues to speak out in Tears We Cannot stop – a provocative and deeply personal call for change. Dyson argues that if we are to make real racial progress we must face difficult truths, including being honest about how black grievance has been ignored, dismissed, or discounted. In the tradition of James Baldwin’s The Fire Next Time – short, emotional, literary, powerful – this is the book that all Americans who care about the current and long-burning crisis in race relations will want to read.