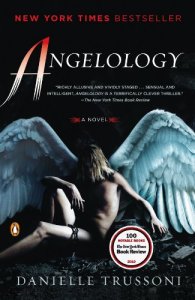 So – I wanted to like these books. Angelology started out strong, despite the horrid title. It was shaping up to be a religious thriller along the lines of The DaVinci Code, with shadowy organizations and cryptic clues leading to a treasure that would shake the foundations of civilization – and then it kind of fell apart. The entire point of the plot was discarded like a piece of trash at the end of the novel, and it ended on – not quite a cliffhanger, but also not an ending, either. With three years between books, had I read Angelology when it came out, I would have been extremely frustrated with not being able to continue to read the story. I continued on to Angelopolis hoping to find answers and continue the story – and was disappointed at the turn it took. I assume there will be at least a third book, as so much was left unresolved in Angelopolis, just as the first novel was left unresolved. The very last sentence of Angelopolis stunned me as it was a complete 180 from the rest of the book and seemed completely at odds with how the characters had acted for the past two novels.

In short, the first was decent and the second was a train wreck with so many plot holes….well, you could drive the train, in the process of wrecking, through them. Don’t waste your time. And – Angelology? Really? Angelologists? Those terms made me cringe every time I read them. 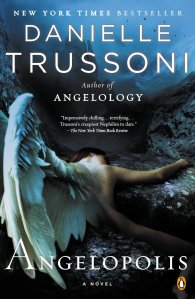 From the back of Angelology:

There were giants in the earth in those days; and also after that, when the sons of God came in unto the daughters of men, and they bore children to them. –Genesis 6:5

Sister Evangeline was just a girl when her father entrusted her to the Franciscan Sisters of Perpetual Adoration in upstate New York. Now, at twenty-three, her discovery of a 1943 letter from the famous philanthropist Abigail Rockefeller to the late mother superior of Saint Rose Convent plunges Evangeline into a secret history that stretches back a thousand years: an ancient conflict between the Society of Angelologists and the monstrously beautiful descendants of angels and humans, the Nephilim.

For the secrets these letters guard are desperately coveted by the once-powerful Nephilim, who aim to perpetuate war, subvert the good in humanity, and dominate mankind. Generations of angelologists have devoted their lives to stopping them, and their shared mission, which Evangeline has long been destined to join, reaches from her bucolic abbey on the Hudson to the apex of insular wealth in New York, to the Montparnasse cemetery in Paris and the mountains of Bulgaria.

From the back of Angelopolis:

A decade has passed since Verlaine saw Evangeline alight from the Brooklyn Bridge, the sight of her new wings a betrayal that haunts him still. Now an elite angel hunter for the Society of Angelology, he pursues his mission with single-minded devotion: to capture, imprison, and eliminate her kind.

But when Evangeline suddenly appears on a twilit Paris street, Verlaine finds her nature to be unlike any of the other creatures he so mercilessly pursues, casting him into a spiral of doubt and confusion that only grows when she is abducted before his eyes by a creature who has topped the society’s most-wanted list for more than a century. The ensuing chase drives Verlaine and his fellow angelologists from the shadows of the Eiffel Tower to the palaces of St. Petersburg and deep into the provinces of Siberia and the Black Sea coast, where the truth of Evangeline’s origins—as well as forces that could restore or annihilate them all—lie in wait.