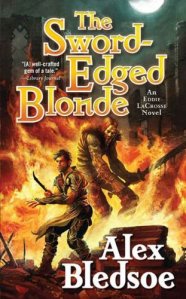 These two books are the first two Eddie LaCrosse novels. They’re a unique blend of Private Investigator Noir and Medieval Light Fantasy. Eddie LaCrosse is a sword-jockey for hire – he’s our Private Investigator. You can find your standard PI Noir tropes – instead of a sexy secretary, our hero’s offices lie above a tavern kept by a lady with a mysterious past. Instead of a favorite pistol or gun, LaCrosse begins with his “old Fireblade Warrior three-footer, the one with the narrow dagger hidden in the hilt.” Damsels in distress abound, but this time they’re queens and princesses and barmaids instead of widows, bored wives, or mafia dolls. It’s definitely an interesting combination of two possibly played-out themes.

In The Sword-Edged Blonde, we learn about Eddie’s past, partially through flashbacks. Sure, we could have started at the beginning, but the flashbacks really need the viewpoint of current-day Eddie to make sense. Eddie winds up in the employ of a very old friend, trying to prove the innocence of the man’s new wife, an amnesiac whose past is coming back to haunt her. 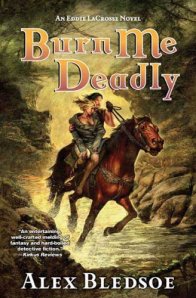 In Burn Me Deadly, Eddie finds out there are more things on earth than he originally believed. The books are still light fantasy, in that there is very, very little magic – just enough to make Eddie question things he’d taken for granted.

If you like Noir and Fantasy, I’d say definitely pick these up. If you only like one or the other, they’re alright, and worth reading if you’ve got nothing better to do, but there are definitely better choices. I’m not a big fan of Noir myself, and I wasn’t planning on looking for the rest of the series, but they’ve hooked me despite myself. Especially when I discovered that Wake of the Bloody Angel is apparently that sexy tavernkeeper’s story!

From the back of The Sword-Edged Blonde:

It should have been a case like any other: a missing princess, a king willing to pay in gold for her return. But before he realizes it, sword jockey Eddie LaCrosse is swept up in a web of mystery and deceit involving a brutally murdered royal heir, a queen accused of an unspeakable crime, and the tragic past he thought he’d left behind.

In order to uncover the answers he seeks, Eddie must delve into the dark underbelly of society while digging deep into his own private history, drawing past and present together. Vast conspiracies, women both beautiful and deadly, and a centuries-old revenge scheme are only a few of the pieces in a lethal puzzle.

From the back of Burn Me Deadly:

Above Angelina’s Tavern in down-and-dirty Neceda you’ll find the office of Eddie LaCrosse, a freelance sword jockey who, for twenty-five gold pieces a day, will take on any task short of murder for hire. Eddie’s on his way back from a routine investigation when his horse almost runs down a half-naked blonde in serious trouble. Against his better judgment, he promises to protect the frightened young woman, only to find himself waylaid by unknown assailants and left for dead beside her mutilated body.

Eddie isn’t the kind of guy to just let something like this pass. But who killed Laura Lesperitt? Eddie’s quest for payback leads him to a tangled mystery involving a notorious crime lord, a backwoods dragon cult, royal scandals, and a duplicitous femme fatale who has trouble keeping her clothes on. As bodies pile up, attracting the unwelcome attention of the king’s guards, Eddie must use all his wits if he hopes to survive…. 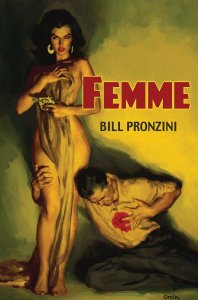 I’m not usually much of a mystery/noir fan – I enjoy mysteries set in fantasy worlds, or in urban fantasy, but not so much in noir, real-life settings. The cover of Femme caught my eye though, and since these were novellas, and short, I thought I’d branch out.

Not the best decision I’ve ever made. 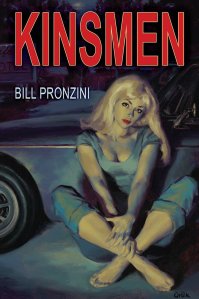 Femme and Kinsmen are part of Pronzini’s “Nameless Detective” series. They’re told from the viewpoint of a P.I. who is never named. Femme was the first one I read, and I just felt like the story drug on. You wouldn’t think a 175 page book could be slow and still get through the plot, but this one was. The plot was fairly simplistic. Our unnamed protagonist is called in by a bail bondsman to find the brother of a femme fatale. When they find the brother, they discover the femme fatale is not exactly the caring sister she’s portrayed herself to be. Since it’s a novella, I can’t really say much more without ruining the surprise. Let’s just say that the ONLY reason I decided to go ahead and read Kinsmen was because of its connection to my hometown.

Kinsmen is the story of a boy and a girl from the University of Oregon (GO DUCKS! …sorry.) who go missing on their way down to southern California to see their families. I felt like the action moved a little quicker, but it may be that I just enjoyed seeing places I used to haunt being prowled by our unnamed hero. Unlike Femme, where I felt like people got their just desserts in the end (for the most part), in Kinsmen two young lovers are caught by small-town bigotry to a tragic end. Again, it’s a novella, so I won’t say much.

Unless you’re a mystery/noir fan, I probably wouldn’t recommend these. Yes, they’re quick reads, so you won’t waste much time on them, but it’s still time I could have spent reading far better things. If you do like these, apparently Pronzini has written novels in this series as well, so they’re not all so short and simplistic. Perhaps I would have enjoyed one of those better, but if the pacing is the same as these, I probably wouldn’t.

From the back of Femme:

You hear the term a lot these days, usually in connection with noir fiction and film noir. But they’re not just products of literature or film, the folklore of nearly every culture. They exist in modern society, too. The genuine femme fatales you hear about now and then are every bit as evil as the fictional variety. Yet what sets them apart is that they’re the failures, the ones who for one reason or another got caught. For every one of those, there must be several times as many who get away with their destructive crimes…

In the thirty years the Nameless Detective has been a private investigator, he has never once had the misfortune to cross paths with this type of seductress… but in Femme he’ll meet Cory Beckett, a deadly woman who has brought some new angles to the species. New—and terrible.

From the back of Kinsmen:

Allison Shay was traveling home from the University of Oregon with her new boyfriend, Rob Compton, when their car broke down near the tiny rural town of Creekside, California. Soon after, Allison and Rob went missing without a trace.

Whatever happened, it felt like something bad to the Nameless Detective. Five days without a whisper of contact with the outside world. Long past the inconsiderate-kids stage; long past the silly and the harmless.

The real question facing the Nameless Detective: are they still alive?