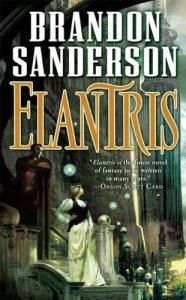 I’ve enjoyed every Brandon Sanderson book I’ve read, and Elantris was certainly no exception. This was a beautiful mix of religious and political intrigue, magical mystery, and just a touch of romance. The ultimate answer to the mystery was so elegantly simple, but discovered so late, that consequences still had to be faced even when the main problem was fixed. (I’m trying to be vague so I don’t spoil it!) I loved both Raoden and Sarene, and in a way, Hrathen too. He was a wonderfully written villain – one of those villains whose motivations you get to see and understand, so you end up sympathizing with him even as you don’t want to see him succeed. Sanderson definitely has a talent for unusual fantasy novels, with elaborate plots and complex, well thought-out worlds.

In short, yet another amazing book from Brandon Sanderson.

From the back of Elantris:

Elantris: gigantic, beautiful, literally radiant, filled with benevolent beings who used their powerful magical abilities to benefit all the people of Arelon. Yet each of these godlike beings had been an ordinary person until touched by the mysterious transforming power of the Shaod. Then, ten years ago, without warning, the magic failed. Elantrians became wizened, feeble, leper-like creatures, and Elantris itself dark, filthy, and crumbling. The Shaod became a curse.

Arelon’s new capital city, Kae, crouches in the shadow of Elantris, which its people do their best to ignore. Princess Sarene of Teod has come to Kae for a marriage of state with Crown Prince Raoden, hoping – based on their correspondence – also to find love. She finds instead that Raoden has died, and she is considered his widow. Both Teod and Arelon are under threat as the last remaining holdouts against the imperial ambitions of the ruthless religious fanatics of Fjordell. Sarene decides to make the best of a sad situation and use her position to oppose the machinations of Hrathen, a Fjordell High priest who has come to convert Arelon and claim it for his emperor and his god.

But neither Sarene nor Hrathen suspects the truth about Prince Raoden’s disappearance. Taken by the same strange malady that struck the fallen gods of Elantris, Raoden was secretly imprisoned within the dark city. His struggle to create a society for the wretches trapped there begins a series of events that will bring hope to Arelon, and perhaps even reveal the secret of Elantris itself.

One thought on “Book Review: Elantris by Brandon Sanderson”