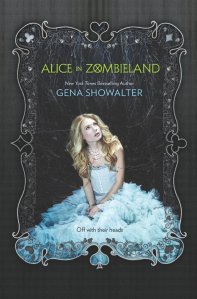 This was an interesting re-imagining of Alice in Wonderland. In Alice in Zombieland, Alice Bell’s life has always been curtailed by her father’s insistence that monsters exist. The family cannot leave the house after dark, she’s been taught how to fight hand-to-hand and with a couple of weapons, and they never – NEVER – drive past the graveyard. All of this changes in one night – when Alice “falls down the rabbit hole” as it were – and discovers her father wasn’t insane after all.

Now, living with her grandparents, haunted by visions of her little sister and glimpses of monsters in the dark, Alice – or Ali, as she insists on being called – finds herself being called on to fight the monsters alongside the roughest crowd in her high school. Falling in love with the leader of the bad boys doesn’t help her social life, but might help her stay alive.

I enjoyed this book and will probably pick up the sequel, Through the Zombie Glass, if I can find it at the library. The writing flowed well most of the time, and while Alice began a little whiny, by the end of the book she was pretty bad ass. It felt…. a little more “young adult” than some young adult books I’ve read; the emotions seemed detached or damped down a bit. While she was dealing with grief over the loss of her family, and possible death at the hands of zombies, it just didn’t feel as raw as I think those emotions should have felt. And the notion of a bunch of high school kids fighting zombies – with the support of adults, including the high school principal – was a little weird. Still an interesting book, and not a waste of time, but it felt a lot like “teenagers are special snowflakes!”

From the back of Alice in Zombieland:

SHE WON’T REST UNTIL SHE’S SENT EVERY WALKING CORPSE BACK TO ITS GRAVE. FOREVER.

Had anyone told Alice Bell that her entire life would change course between one heartbeat and the next, she would have laughed. From blissful to tragic, innocent to ruined? Please. But that’s all it took. One heartbeat. A blink, a breath, a second, and everything she knew and loved was gone. Her father was right. The monsters are real. To avenge her family, Ali must learn to fight the undead. To survive, she must learn to trust the baddest of the bad boys, Cole Holland. But Cole has secrets of his own, and if Ali isn’t careful, those secrets might just prove to be more dangerous than the zombies.

One thought on “Book Review: Alice in Zombieland by Gena Showalter”