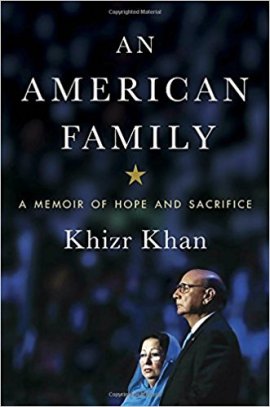 An American Family: A Memoir of Hope and Sacrifice
by Khizr Khan
Memoir
271 pages
Published 2017

Like many people, I was inspired by the Khizr Khan’s speech at the Democratic Convention last year, and appalled by Trump’s reaction. As a Marine wife, the family members left behind when a service member dies get my utmost sympathy and compassion. That was my biggest fear while my husband was in the Marines, and it’s still a very emotional memory to look back on. So when I heard that Khan was writing a book, I knew I HAD to read it. I put a hold request in at the library before the book was published, and I’m glad I did. The book is definitely one of my favorites of 2017. (One of my next posts will be a round up of my favorites from this year.)

An American Family follows the Khans’ journey from Pakistan, to Dubai, to Texas, Maryland, and finally Virginia. And it’s fascinating. He says in the beginning of the book that he wrote it to answer the question he’s constantly asked: why do you love America? Why are you a Patriot? He couldn’t answer it in a few short sentences. This book is his answer, and what an answer it is. It’s impossible to summarize this book – it must be read.

It’s a very easy read – it flows beautifully, and Khan tells a story well. It’s easy, at least, until you get to the point where their son dies in action. Perhaps it wouldn’t have such an emotional effect on someone else, but that, and its aftermath, was pretty hard for me to read about. The event is important, however. Its repercussions ripple out through the Khans’ lives and affect everything they touch.

I can’t recommend this book highly enough. Especially if you’re American, and no matter where on the political spectrum you fall, this book is important. It might give you a different view on immigrants.

From the cover of An American Family:

“I am an American patriot not because I was born here but because I was not. I embraced American freedoms, raised my children to cherish and revere them, and lost a son who swore an oath to defend them, because I come from a place where they do not exist.”

In fewer than three hundred words, Muslim American Gold Star father Khizr Khan electrified viewers around the world when he took the stage at the 2016 Democratic National Convention. And when he offered to lend Donald Trump his own much-read and dog-eared pocket Constitution, his gesture perfectly encapsulated the feelings of millions. But who was that man, standing beside his wife, extolling the promises and virtues of the U.S. Constitution?

In this urgent and timeless immigrant story, we learn that Khizr Khan has been many things. He was the oldest of ten children born to farmers in Pakistan, and a curious and thoughtful boy who listened rapt as his grandfather recited Rumi beneath the moonlight. He was a university student who read the Declaration of Independence and was awestruck by what might be possible in life. He was a hopeful suitor, awkwardly but earnestly trying to win the heart of a woman far out of his league. He was a brilliant and diligent young family man who worked tow jobs to save enough money to put himself through Harvard Law School. He was a loving father who, having instilled in his children the ideals that brought him and his wife to America – the sense of shared dignity and mutual responsibility – tragically lost his son, an Army captain killed while protecting his base camp in Iraq. He was and is a patriot, and a fierce advocate for the rights, dignities, and values enshrined in the American system.

An American Family shows us who Khizr Khan and millions of other American immigrants are, and why – especially in these tumultuous times – we must not be afraid to step forward for what we believe in when it matters most.