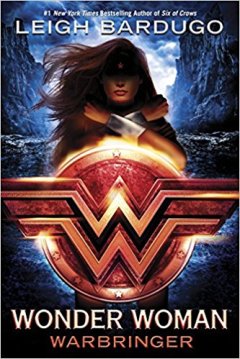 WONDER WOMAN YASSSS. I might like Wonder Woman just a little bit. And the novel is written by Leigh Bardugo, the creator of the Grishaverse! (I reviewed her Six of Crows and Crooked Kingdom, and REALLY need to get my hands on the other trilogy!)

So this is basically a slightly different origin story for Wonder Woman – or at least the reason she leaves Themyscira is a little different for this book’s plot. One thing I’ve always enjoyed about DC, and superheroes in general, is that it’s not so much about the specific details of what they’ve done, so much as who they really are and what they believe in. And in that, Diana is very much true to herself in Warbringer. Given a choice between two outcomes, she opts for a third. Not “do I save these people, or those people” but “how do I save EVERYONE?”

I also really liked that The Warbringer – the girl Diana is trying to save – is no shrinking violet herself. She absorbs the knowledge of what she is in a bit of a shock, but once over that, she displays courage and competence as well, and is a fitting companion for Diana. Her friends were also fun characters, and I especially liked Nim.

Again we have representation, too! The Warbringer and Nim are both women of color. Diana mentions that her skin is brown, as well. Coming from Bardugo, I shouldn’t have been surprised that sexuality was also addressed in the book, but not as a plot point, which is lovely to see. It just is a facet of a character. I especially loved the shoutout to Diana’s bisexuality. 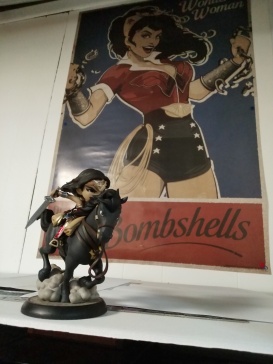 Bardugo has quickly become one of my favorite authors. She tells great stories, with complex characters, and includes minority characters, both racial and GLBT. Her plots rocket right along, with well-thought-out action scenes that are easy to follow and emotionally impactful.

I’m not sure Warbringer quite makes my Best of 2017 list, but it was really good.

From the cover of Wonder Woman: Warbringer:

She will become one of the world’s greatest heroes: WONDER WOMAN. But first she is Diana, Princess of the Amazons. And her fight is just beginning. . . .

Diana longs to prove herself to her legendary warrior sisters. But when the opportunity finally comes, she throws away her chance at glory and breaks Amazon law—risking exile—to save a mere mortal. Even worse, Alia Keralis is no ordinary girl and with this single brave act, Diana may have doomed the world.

Alia just wanted to escape her overprotective brother with a semester at sea. She doesn’t know she is being hunted. When a bomb detonates aboard her ship, Alia is rescued by a mysterious girl of extraordinary strength and forced to confront a horrible truth: Alia is a Warbringer—a direct descendant of the infamous Helen of Troy, fated to bring about an age of bloodshed and misery.

Together, Diana and Alia will face an army of enemies—mortal and divine—determined to either destroy or possess the Warbringer. If they have any hope of saving both their worlds, they will have to stand side by side against the tide of war.