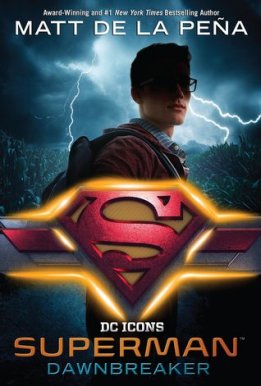 Update: it has come to my attention that Matt De La Peña has been accused of sexual harassment. I was not aware of this when I wrote this review. It has generally been my policy to NOT separate art from artist unless the artist is no longer profiting from the work. I will not be reading any more of his books.

I mulled over which book to review today – it’s the Fourth of July, or Independence Day if you’re in the United States. I think the only superhero more all-American than Superman would be Captain America, but it’s Superman that I recently read! This is the fourth in the DC Icons series, all of which I have now reviewed. It started with Wonder Woman, then moved through Batman and Catwoman before culminating in Superman. All four books have been written by popular young adult authors, from Leigh Bardugo to Marie Lu to Sarah J. Maas. Superman went to Matt De La Peña, who I had not actually heard of before. He apparently wrote a book called Ball Don’t Lie that was made into a movie in 2011, and another book titled Mexican Whiteboy. What I’m trying to say is that De La Peña’s Hispanic background makes him a perfect choice for this book. Because whatever else can be said about Superman, his is the ultimate immigrant story.

And this book not only tells Superman’s immigrant story, but deals heavily with immigrant issues around him as well. Smallville is deliberating a new law that is basically stop-and-frisk; Hispanic people are going missing; undocumented immigrants are getting beaten in the streets. Clark is rightly horrified, and vows to get to the bottom of the disappearances.

The book is very timely, and I like what it says about one of our country’s greatest fictional heroes. It reminds me of Justice League: Gods and Monsters, in which Superman is the son of General Zod, and was raised by illegal Mexican immigrants instead of the all-American Kents. (It’s a fantastic animated movie, and well worth watching.)

Lex Luthor makes an appearance, and for a while I thought Clark’s best friend, Lana, was a stand-in for Lois, but Lois is mentioned ever-so-briefly late in the book.

This is the fourth and final book in the DC Icons series, and taken as a whole, they’re quite good. I wish they were a little more entwined with one another, but I understand that would be difficult with four different authors. But they are a very neat re-work of the four characters’ origin stories.

From the cover of Superman: Dawnbreaker:

HIS POWER IS BEYOND IMAGINING.

Clark Kent has always been faster, stronger – better – than everyone around him. But he wasn’t raised to show off, and drawing attention to himself could be dangerous. Plus, it’s not like he’s earned his powers . . . yet.

BUT POWER COMES WITH A PRICE.

Lately it’s becoming more difficult to hold back and keep his heroics in the shadows. When Clark follows the sound of a girl crying, he comes across Gloria Alvarez and learns that a dark secret lurks in Smallville. Turns out, Clark’s not the only one hiding something. Teaming up with his best friend, Lana Lang, he throws himself into the pursuit of the truth. What evil lies below the surface of his small town? And what will it cost Clark to face the truth about his past as he steps into the light to become the future Man of Steel?

BEFORE HE CAN SAVE THE WORLD, HE MUST SAVE SMALLVILLE. 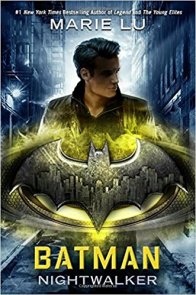 So I didn’t actually realize, back when I reviewed Wonder Woman: Warbringer, that it was the start of a series of origin novels. The second is this one, about Batman, and the next is Catwoman: Soulstealer. (I can’t wait for that one, Wonder Woman, Hawkgirl, and Catwoman have been my three favorite superheroes for ages, even if Catwoman isn’t exactly a hero!) After Catwoman’s book, we get Superman’s book, and that’s all that’s been announced, so I don’t know if there will be any more. Though I hope there will be, because these first two have been excellent!

The name Batman is never actually mentioned in this book; he is Bruce Wayne the entire way through. He does get a suit, towards the end, and starts his career as Batman without really realizing he’s doing so. We get a few nods to the Batman mythos – he stops to watch a swarm of bats heading out to hunt, and he mentions the broken grandfather clock that he hasn’t fixed yet. But this is a Bruce around his high school graduation, just starting to learn about the kinds of tech that Wayne Tech produces. We do meet a few familiar faces beyond Alfred.

I had a few moments where I wanted to shake both Bruce and the adults around him because NO ONE IN THEIR RIGHT MIND WOULD DO THAT and if it needed to happen for plot’s sake make it more believable! But it was overall pretty good.

There’s no need to read this in order, from what I can tell – events in Wonder Woman have no effect on Gotham. Though the Catwoman book is also set in Gotham, so it will be interesting to see if they intertwine at all.

If you like DC Comics, these are definitely worth reading – if you don’t, skip them.

From the cover of Batman: Nightwalker:

Before he was Batman, he was Bruce Wayne. A reckless boy willing to break the rules for a girl who may be his worst enemy.

The Nightwalkers are terrorizing Gotham City, and Bruce Wayne is next on their list.
The city’s elites are being taken out one by one as their mansions’ security systems turn against them, trapping them like prey. Meanwhile, Bruce is about to become eighteen and inherit his family’s fortune, not to mention the keys to Wayne Industries and all the tech gadgetry that he loves. But on the way home from his birthday party, he makes an impulsive choice and is sentenced to community service at Arkham Asylum, the infamous prison that holds the city’s most nefarious criminals.

Madeleine Wallace is a brilliant killer . . . and Bruce’s only hope.
The most intriguing inmate in Arkham is Madeleine, a brilliant girl with ties to the Nightwalkers. A girl who will only speak to Bruce. She is the mystery he must unravel, but is he convincing her to divulge her secrets, or is he feeding her the information she needs to bring Gotham City to its knees?

In this second DC Icons book–following Leigh Bardugo’s Wonder Woman: Warbringer–Bruce Wayne is proof that you don’t need superpowers to be a super hero, but can he survive this game of tense intrigue, pulse-pounding action, and masterful deception?

WONDER WOMAN YASSSS. I might like Wonder Woman just a little bit. And the novel is written by Leigh Bardugo, the creator of the Grishaverse! (I reviewed her Six of Crows and Crooked Kingdom, and REALLY need to get my hands on the other trilogy!)

So this is basically a slightly different origin story for Wonder Woman – or at least the reason she leaves Themyscira is a little different for this book’s plot. One thing I’ve always enjoyed about DC, and superheroes in general, is that it’s not so much about the specific details of what they’ve done, so much as who they really are and what they believe in. And in that, Diana is very much true to herself in Warbringer. Given a choice between two outcomes, she opts for a third. Not “do I save these people, or those people” but “how do I save EVERYONE?”

I also really liked that The Warbringer – the girl Diana is trying to save – is no shrinking violet herself. She absorbs the knowledge of what she is in a bit of a shock, but once over that, she displays courage and competence as well, and is a fitting companion for Diana. Her friends were also fun characters, and I especially liked Nim.

Again we have representation, too! The Warbringer and Nim are both women of color. Diana mentions that her skin is brown, as well. Coming from Bardugo, I shouldn’t have been surprised that sexuality was also addressed in the book, but not as a plot point, which is lovely to see. It just is a facet of a character. I especially loved the shoutout to Diana’s bisexuality.

Bardugo has quickly become one of my favorite authors. She tells great stories, with complex characters, and includes minority characters, both racial and GLBT. Her plots rocket right along, with well-thought-out action scenes that are easy to follow and emotionally impactful.

I’m not sure Warbringer quite makes my Best of 2017 list, but it was really good.

From the cover of Wonder Woman: Warbringer:

She will become one of the world’s greatest heroes: WONDER WOMAN. But first she is Diana, Princess of the Amazons. And her fight is just beginning. . . .

Diana longs to prove herself to her legendary warrior sisters. But when the opportunity finally comes, she throws away her chance at glory and breaks Amazon law—risking exile—to save a mere mortal. Even worse, Alia Keralis is no ordinary girl and with this single brave act, Diana may have doomed the world.

Alia just wanted to escape her overprotective brother with a semester at sea. She doesn’t know she is being hunted. When a bomb detonates aboard her ship, Alia is rescued by a mysterious girl of extraordinary strength and forced to confront a horrible truth: Alia is a Warbringer—a direct descendant of the infamous Helen of Troy, fated to bring about an age of bloodshed and misery.

Together, Diana and Alia will face an army of enemies—mortal and divine—determined to either destroy or possess the Warbringer. If they have any hope of saving both their worlds, they will have to stand side by side against the tide of war.

Afire Pages
INKISH KINGDOMS
A Cat, A Book, and A Cup of Tea
Forever and Everly
My World of Books