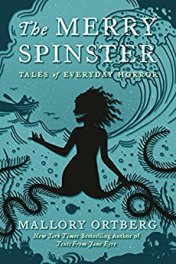 So this JUST came out. I’d had my eye on it for a few months, and put a request in as soon as my library ordered it. The author recently came out as trans, so it’s also part of my effort to read more inclusively. Ortberg definitely played with gender and sexuality in several of these tales; in one of them people decided whether to be the husband or the wife, independent of their gender, in their marriage. (One party to the marriage in the story stated “I’ve been trained for both roles.”) In another all of a man’s daughters used male pronouns and that was never explored further. That was slightly odd.

These were dark, twisted versions of these stories. “Our Friend Mr. Toad,” for example, involved gaslighting and psychologically torturing poor Mr. Toad. I found that one particularly disturbing. I enjoyed the title story, Ortberg’s version of Beauty and the Beast, which has a very different ending from expected. I also really liked “The Daughter Cells”, inspired by The Little Mermaid. I LOVED “Fear Not: An Incident Log.”

I think this was a great, albeit strange, little book. It’s unique, for sure, and a quick read. If you’re looking for a fairy tale collection that is VERY different, try this one.

From the cover of The Merry Spinster:

From Mallory Ortberg comes a collection of darkly mischievous stories based on classic fairy tales. Adapted from the beloved “Children’s Stories Made Horrific” series, “The Merry Spinster” takes up the trademark wit that endeared Ortberg to readers of both The Toast and the best-selling debut Texts From Jane Eyre. The feature has become among the most popular on the site, with each entry bringing in tens of thousands of views, as the stories proved a perfect vehicle for Ortberg’s eye for deconstruction and destabilization. Sinister and inviting, familiar and alien all at the same time, The Merry Spinster updates traditional children’s stories and fairy tales with elements of psychological horror, emotional clarity, and a keen sense of feminist mischief.

Readers of The Toast will instantly recognize Ortberg’s boisterous good humor and uber-nerd swagger: those new to Ortberg’s oeuvre will delight in this collection’s unique spin on fiction, where something a bit mischievous and unsettling is always at work just beneath the surface.

Unfalteringly faithful to its beloved source material, The Merry Spinster also illuminates the unsuspected, and frequently, alarming emotional complexities at play in the stories we tell ourselves, and each other, as we tuck ourselves in for the night.

Bed time will never be the same.