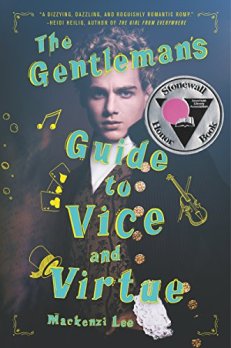 This was excellent! First, all the diversity here – between the bisexual main character, his best friend, who is biracial, has an “invisible” disability, and also likes men (or at least likes Monty!) and his seemingly asexual sister – the book covers so many facets, it’s great.

Given that it’s historical fiction, set in Victorian Europe, Percy’s biracial heritage has him just seen as black to most people they encounter. Monty doesn’t seem to understand what that means, most of the time, and is a little blinded by his rich white boy privilege. He gets talked to a couple of times about how he’s being blind to the problems his friend is facing.

I liked that we got to peek under Monty’s playboy facade a few times, when being punched has him flashing back to being beaten by his father for being a “disappointment.” An interaction between him and a pirate captain was particularly sweet, teaching him to fight back because he’s worth defending.

I LOVE Felicity, Monty’s sister, and I’m really eager to read her story in the sequel to this book, The Lady’s Guide to Petticoats and Piracy. She is so badass, and incredibly intelligent.

The writing was fun, the action well-paced, and the dialogue clever. I was a little put off at first by the size of the book, but I flew through it quickly. I especially liked Monty’s bisexuality – how he just cheerfully perved on practically everyone his age. It definitely reminded me of a few people I know!

Something that I noted, near the end of the book, was Percy not asking Monty to stop his perving. What he said was “if you ever go behind my back…” which implies as long as Percy knows, it’s not an issue. Yay for non-monogamy being present in YA! It’s nice to see alternative relationship structures being presented, though I wish it had been more than just implied.

This was an excellent read for Pride Month, and I loved the amount of diversity and intersectionality present in it. You can find the rest of my Pride Month reads listed here.

From the cover of The Gentleman’s Guide to Vice and Virtue:

Henry “Monty” Montague was born and bred to be a gentleman, but he was never one to be tamed. The finest boarding schools in England and the constant disapproval of his father haven’t been able to curb any of his roguish passions – not for gambling halls, late nights spent with a bottle of spirits, or waking up in the arms of women or men.

But as Monty embarks on his Grand Tour of Europe, his quest for a life filled with pleasure and vice is in danger of coming to an end. Not only does his father expect him to take over the family’s estate upon his return, but Monty is also nursing an impossible crush on his best friend and traveling companion, Percy.

Still, it isn’t in Monty’s nature to give up. Even with his younger sister, Felicity, in tow, he vows to make this yearlong escapade one last hedonistic hurrah and flirt with Percy from Paris to Rome. But when one of Monty’s reckless decisions turns their trip abroad into a harrowing manhunt that spans across Europe, it calls into question everything he knows, including his relationship with the boy he adores.

2 thoughts on “Book Review: The Gentleman’s Guide to Vice and Virtue”