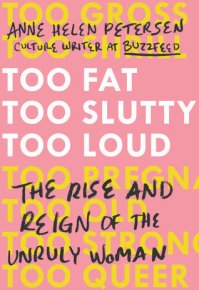 This is the first book Book Riot chose for Persist, their Feminist Book Club. I only just learned about the book club, so I’m reading the first two books before diving into the third. (Second book is Eloquent Rage by Brittney Cooper, and the third book is Headscarves and Hymens by Mona Eltahawy.) I really wish I could have read this book with their book club, as it definitely would benefit from being able to discuss each chapter with other readers.

The book is divided into chapters focusing on individual women and what they are guilty of being too much of. So Too Strong – Serena Williams, or Too Shrill – Hillary Clinton, or Too Slutty – Nicki Minaj. Then it dives deeply into why people think the woman embodies that negative, and often, what the woman herself thinks of it. We get cultural background on the adjective; in Too Pregnant, Petersen examines how celebrity pregnancies have changed how we treat pregnant women – how pregnancy has changed from something to be hidden to something to be valued and publicized and adored. But when someone isn’t pregnant in the right way – Kim Kardashian, for instance, suffered from swollen feet and preeclampsia and general misery and “poor” fashion choices – we judge them for it.

Too Loud delves into the world of publishing and book reviewing, profiling Jennifer Weiner’s fight against sexism in publishing. The chapter educates us on how the genre of “chick lit” started, and how women authors and readers are too often relegated to “chick lit” when if the same story had been written by a man, about a man instead of a woman, it would just be “literature” and eligible for review by things like the The New York Times Book Review.

Too Fat, Too Slutty, Too Loud was a highly educational look at pop culture and how women are judged much harsher than men are for showing the same traits. It is imminently readable – I only started to fall asleep once, and I think that’s more because I only slept four hours last night! I had a fiction book on the table beside me, ready to dive into when I needed a break from the nonfiction – it’s still there, untouched. This is a great book, but I’d definitely read it as part of a book club or a buddy read if you can. Get a friend to read it so you can discuss it!

You know the type: the woman who won’t shut up, who’s too brazen, too opinionated – too much. It’s not that she’s an outcast (she might even be your friend, or your wife, or your mother) so much as she’s a social variable. Sometimes, she’s the life of the party; others, she’s the center of gossip. She’s the unruly woman, and she’s one of the most provocative, powerful forms of womanhood today.