I’m still trying to decide exactly what I want to do with this space on Sundays. I’ve done link roundups, I’ve done short updates on life, I’ve even moved a review to Sunday on the rare occasion I didn’t have anything else planned by Saturday night, but nothing has really felt, I don’t know, right.

I’m mulling over the idea of doing opinion pieces on Sunday, or possibly snippets of fiction. (I’ve written a little bit of very short fiction, and would kind of like to practice more.) I’m just not really sure what I want to do here on Sundays. 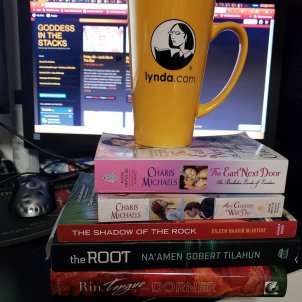 In other news, I’ll be roaming around the Baltimore Book Festival today! We went Friday, and attended several panels. I’ve now listened to several authors from my To-Be-Read list, and I think my favorite so far is Na’amen Gobert Tilahun, author of The Root and The Tree. He was on two panels we watched Friday, and it turns out he’s on a few more today. (I’m not stalking him, I swear!) He’s really fun to listen to. Zoraida Cordova, author of The Brooklyn Brujas, was also really fun to watch.

One of my first panels today is about Author/Blogger relationships, so I’m hoping to get a lot out of that. I’m also planning to go to panels about how Cities can be their own characters; Politics, Resistance, and Spec Fic; Magic Systems; Literary Sci-Fi/Fantasy; and maybe a panel about the Marginalized Majority – how marginalized voices together actually become a majority.

On Friday I went to a panel about creating characters, one about worldbuilding, one about heroes and villains, and my last panel was about genres that people think have been overdone revived by marginalized authors. (Do we really need MORE vampire novels? Yes, if they’re not white, cis, and hetero!)

I’ve also been thinking about something Na’amen Tilihun said about dystopias – he likes them for the revolution part. He could do without the first third in which they’re setting up how terrible things are. Thinking about which dystopias I have and haven’t liked – Future Home of the Living God featured a failed, quickly squashed revolution. Hated it. Station Eleven had no revolution. Hated it. But The Power, American War, The Book of M – all featured revolutions. Loved them. Even The Bannerless Saga features people going against the status quo, and a main character who’s starting to realize maybe the status quo isn’t exactly fair. So it’s really the revolutions that I love, not the dystopias. There was a lot to think about from that panel, and I’m very glad I stayed long enough to go to it.

I came home Friday with five books and a mug – two of the books are even signed! (Na’amen Tilihun’s first, The Root, is one of those two, with The Shadow of The Rock being the other.) We’ll see what I bring home today. You can follow my Twitter for updates throughout the day!

2 thoughts on “Sunday Something”