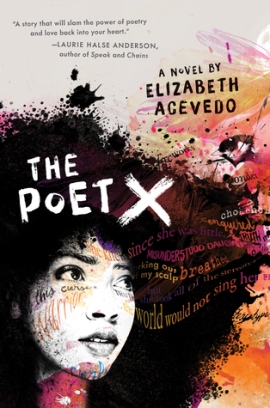 This is another much-hyped book – and oh man, did it stand up to the hype. Told entirely through poetry, this novel was extraordinarily powerful, and had me sobbing near the end. Xiomara is an amazing character, and her poetry shows us her emotions more than prose ever could.

I’ve always loved poetry for that reason; especially poetry that plays with formatting – spacing and line breaks and size of stanzas. It’s so much more evocative than simple paragraphs of prose. (My favorite poet is probably e.e. cummings, who is rather infamous for unusual formatting.)

Acavedo does similar things, making Xiomara’s poetry explode across the page when necessary, and ordering it into simpler stanzas in calmer moments. It’s not rhyming, even poetry; this is written slam poetry. And I love it.

Xiomara is Dominican, living in Harlem, with a very strict, religious mother. Her twin brother is gay but not out to their parents; Xiomara is fine with this but knows their mother won’t be. Her poems cover her need to protect her brother and herself, both from their parents and from the outside world. She writes about street harassment and questioning God and falling in love with a boy, which is also against her mother’s rules. Her poems are at turns heartbreaking and joyous, but always beautiful.

This is an amazing book, and is the second book on my Best of the Year list. I am blown away.

From the cover of The Poet X:

Xiomara Batista feels unheard and unable to hide in her Harlem neighborhood. Ever since her body grew into curves, she has learned to let her fists and her fierceness do the talking.

But Xiomara has plenty she wants to say, and she pours her frustration onto the pages of a leather notebook, reciting the words to herself like prayers – especially after she catches feelings for a boy in her bio class. With Mami’s determination to force her daughter to obey the laws of the church, Xiomara understands that her thoughts are best kept to herself.

When she is invited to join her school’s slam poetry club, she knows that she could never get around Mami’s rules to attend, much less speak her words out loud. But still, she can’t stop thinking about performing her poems.

Because in spite of a world that may not want to hear her, Xiomara refuses to be silent.