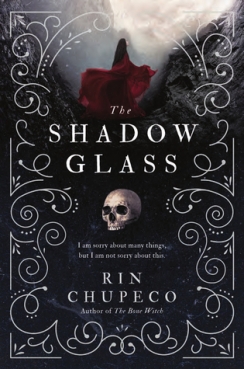 I wish I had the first two books in front of me to refer back to while reading this one. Specifically, the last few chapters of book two. Like the first two books, this one alternates chapters between the bard’s point of view, and the story told to the bard by Tea. The difference is that they have separated paths at this point; so instead of the bard’s chapters being very short, getting clarification on the story she’s telling, he’s now telling what’s happening to him in present day, interspersed with Tea’s letters that he’s carrying, with the rest of her story. This gets VERY confusing. It’s confusing even trying to explain the timeline! Okay, if we split up all three books between Tea’s story and the Bard’s viewpoint, chronologically they’d look like this:

See why I’d like to have the other two books to refer back to? This book is giving me part 3 and part 6. And while it was pretty easy to keep them straight in books one and two, because the Bard wasn’t doing much besides having a conversation with Tea, in this book, he’s off seeing OTHER important events that are happening while Tea is doing other things – and occasionally flitting in and out of his orbit too!

It is a good conclusion – the end, especially, had me crying into my book – but most of the book was very, VERY confusing. Like another conclusion I’ve read recently, if you moved straight through the trilogy with no waiting time, it might not be too bad.

What ESPECIALLY annoys me, is in the Bard’s viewpoint in the first two books, she does something that is supposed to be impossible. So in her story in The Shadowglass, this thing is impossible. But in the Bard’s viewpoint, she’s ALREADY DONE IT. And there’s no explanation of HOW. That’s really what I’d like to refer back to the other two books about. Having that particular task be in the time gap between the two parts of the book was poorly done. Like, really? I read Book 2 almost a YEAR AGO. I don’t remember how that part happened.

So that’s particularly frustrating. I wish Book 3 had condensed to one timeline. I don’t really see why it couldn’t have. It would have been much less confusing!

From the cover of The Shadowglass:

I had no plans of living forever.

In the Eight Kingdoms, none have greater strength or influence than the asha, who hold elemental magic. But only a bone witch has the power to raise the dead. Tea has used this dark magic to breathe life into those she has loved and lost . . . and those who would join her army against the deceitful royals. But Tea’s quest to conjure a shadowglass, to achieve immortality for the one person she loves most in the world, threatens to consume her.

In this dramatic conclusion to Tea’s journey, her heartsglass only grows darker with each new betrayal. She is haunted by blackouts and strange visions, and when she wakes with blood on her hands, Tea must answer to a power greater than she’s ever known. Tea’s life – and the fate of the kingdoms – hangs in the balance.